PromaxBDA, the global association for marketing, promotion and design professionals in the entertainment industry, announced its keynote speakers for the organization’s fourth annual Station Summit in Las Vegas at the Mirage Hotel, June 24-27. New to this year’s event, the PromaxBDA keynote speakers will lead off each day’s activities. Shelly Palmer, Emmy nominated television host, […] 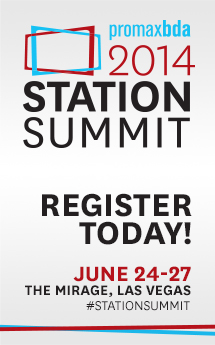 PromaxBDA, the global association for marketing, promotion and design professionals in the entertainment industry, announced its keynote speakers for the organization’s fourth annual Station Summit in Las Vegas at the Mirage Hotel, June 24-27.

New to this year’s event, the PromaxBDA keynote speakers will lead off each day’s activities.

PromaxBDA says the Station Summit “will focus on the issues, trends and emerging business opportunities driving success in local television. It is the largest annual event for local broadcasters and will feature creative and strategic meetings between broadcast affiliates, studios and station groups, as well as PromaxBDA speakers, sessions and awards.”

Shelly Palmer, WNYW New York’s on-air tech expert, is well known for his Emmy Award-nominated series of “Hi-Tech” television specials created for Fox Television as well as his Emmy Award-nominated series Live Digital with Shelly Palmer, created and produced for NBC Universal. He is also the managing director of Advanced Media Ventures Group, an industry advisory and business development firm. At the Station Summit, Palmer will offer information and insight on trends at the nexus of technology, media and entertainment and the impact that this convergence is having on the local station business.

Simon Mainwaring, The New York Times, The Wall Street Journal and Amazon bestselling author, is the founder of We First, a brand consultancy that provides strategy and training to help companies build their businesses through social good. We First shows companies how to define, frame and share the story of the good work they do in ways that build their brand reputation, customer community and social impact. In addition, Mainwaring regularly contributes to The Guardian, Forbes, Fast Company, The Huffington Post and Mashable on branding and social technology. At the Station Summit, Mainwaring will be speaking about how social marketing is a real opportunity for local stations to do more with less for their stations, their brands and their communities.

Stacey Lynn Schulman, the 2012 Gold Medal recipient of the ARF’s Great Mind Award for Research Innovation, is SVP-chief research officer at TVB, the television station marketing association, where she is responsible for driving insights and thought leadership about the value of local broadcast television across platforms. Regularly appearing on CNN, CNBC and Fox News Channel to discuss media trends, Schulman is a widely recognized expert in fan culture behavior. At TVB she has been focused on unearthing the cultural currency of broadcasters’ content in local communities, both through social media and offline word-of-mouth. At the Station Summit, Schulman will be providing a data-driven point of view on how the conversation is changing in media today from a global one toward a local one.

For more information on the event, the keynote speakers, or to attend, please contact or visit promaxbda.org/local and for Station Summit updates, speaker information and promotions, follow PromaxBDA on Twitter at @PromaxBDA and on Facebook at facebook.com/PromaxBDA.