If I was a songwriter, my tune to the summit would be titled, “I got that old Promax feeling again.” May not be hit song material, but I think the attendees at this year’s PromaxBDA Station Summit would nod and sing along. According to the group, and just about everyone I talked to, the summit […]

If I was a songwriter, my tune to the summit would be titled, “I got that old Promax feeling again.”

May not be hit song material, but I think the attendees at this year’s PromaxBDA Station Summit would nod and sing along. According to the group, and just about everyone I talked to, the summit was a success, with more than 1,200 people attending, up from previous years.

The hotel was terrific. I’m not a gambling man. But if I was, I’d only wager on sure things. And for my money, The Mirage is your best bet. The rooms were quiet, modern and spacious. The conference areas were ample-sized and comfortable. There were plenty of dining options right inside the hotel, and the pool was outstanding. My only regret is that I didn’t get to use that amenity more often.

Just as there was much information exchanged in the sessions, so to when attendees met one-on-one, in small groups that gathered in the hallways, coffee shops and parties.

This was my first time attending the PromaxBDA Station Summit under that name and format, but it did indeed feel much like the PromaxBDA conferences of old. Seeing old friends, meeting new ones and talking shop, the passion and excitement returned. I was always humbled (look at all this great work on display) and inspired (can’t wait to get home and create some great work of my own). Congratulations to PromaxBDA for organizing and hosting such a successful event. 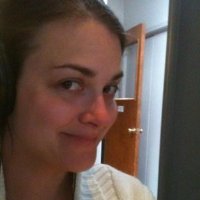 I met a first-time attendee, Sarah Bono, a creative services producer from The Networks of the Mid-Missouri stations in Columbia, KMIZ, the ABC affiliate, and KQFX, the Fox affiliate, and wanted to know what she thought.

First off, a shout out to her creative services director, Mark Kammerich, and general manager, Gene Steinberg, for sending her. Bono said Kammerich was always talking up the summit as a way to see what other stations are doing, and Steinberg thought it would be a treat for her hard work.

Bono has been in creative services for three years, but has only been strictly doing news promotion for about a year.

Learning how your TV station connects with its community and all the offers from the networks and syndicators are two big take-aways she cited.

Her favorite sessions were for the new talk show, The Real, Greame Newell’s Revelations from Neurological News Marketing and the “how to do things on the cheap” session, Something for Nothing.

“It’s been a very positive experience,” said Bono, “I’ve got a lot of ammo to come back with.”

Someday, we ought to be able to figure out how we can get the newest and less experienced members of creative services to go, since they often have the most to gain by attending.

Here are some gold winners from the 2014 PromaxBDA Station Summit.
GOLD, Just Cause, Large Market
Out of the Box – KDFW, Dallas