At most TV stations, they’re known as creative services directors. Some stations call them marketing directors, promotion managers, even brand managers. Regardless of the title, they are in charge of what amounts to an in-house advertising agency at the stations. They drive the overall image branding and day-to-day marketing tactics, from creative to production to […]

At most TV stations, they’re known as creative services directors. Some stations call them marketing directors, promotion managers, even brand managers. Regardless of the title, they are in charge of what amounts to an in-house advertising agency at the stations.

They drive the overall image branding and day-to-day marketing tactics, from creative to production to media buying. Their No. 1 client is usually local news and many play a significant role in programming promotion and local sales.

On any given day, their job takes them from one end of the station to the other. I used to say that if a TV station were a hardware store, I’d know where every nut and bolt was.

Every day they routinely interact with every department in the station and they know who the go-to person is in each.

They spend a considerable amount of time in the newsroom, talking to news managers, anchors, meteorologists, reporters, producers and photographers. You’ll see them behind the scenes in the studio. Or conferring with an account executive about a local client’s commercial in sales. You’ll certainly find them in any news or promotion edit suite. They’re often talking to traffic and are regular visitors in master control.

If you can’t find them in any of those places, try the GM’s office or engineering. Not there? Probably out on a shoot.

All of this gives them a unique perspective into the station’s overall daily operation, and is a factor in why they’re increasingly looked upon as valuable candidates for the general manager’s office.

In May, we asked more than 1,000 local TV marketing executives to take a confidential survey. Today, and all this week, we’ll be revealing the results of that survey, question by question.
Some questions allowed the participants to add their comments and in those cases, we’ll provide an overview of the comments and when necessary, share some actual comments with you.
Let’s get started. 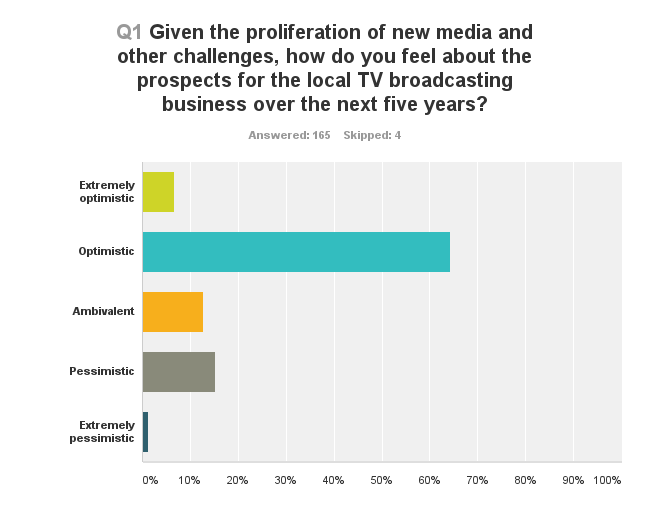 I’m glad to see that more than 70% of respondents were optimistic to extremely optimistic about local TV broadcasting in the next five years. I personally think that the growth of social media is helping local broadcasting make more connections with viewers. And the growth of mobile and digital is giving viewers another platform to utilize content where, when and how they want. 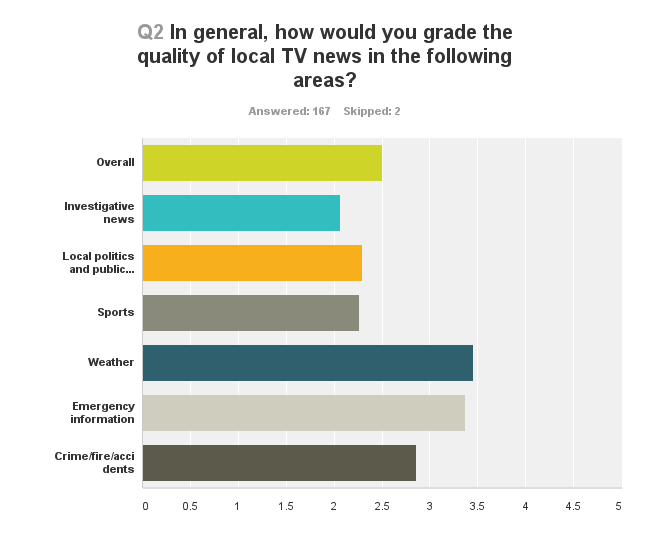 While the “overall” rating for the quality of local news wasn’t particularly high, weather and emergency information scored well. I was a little surprised that investigative reporting scored the lowest. 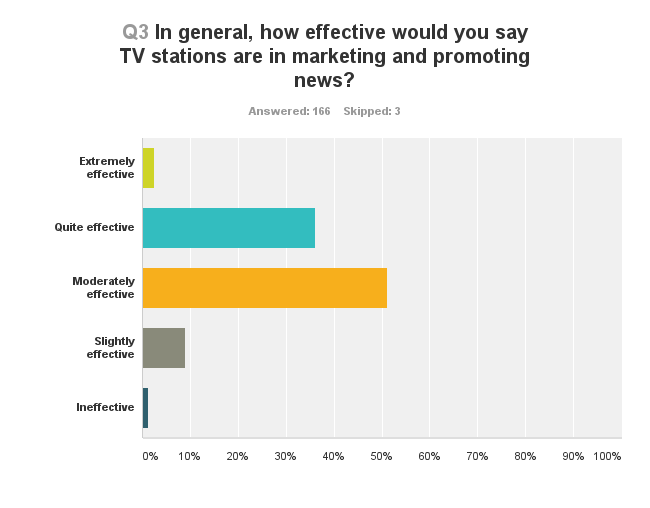 Given that the respondents to this questions are the very folks in charge of marketing and promoting the news, I think it’s surprising that 61% think they’re only moderately effective to ineffective in this area. Why is that? It’s a very telling and troubling indicator. 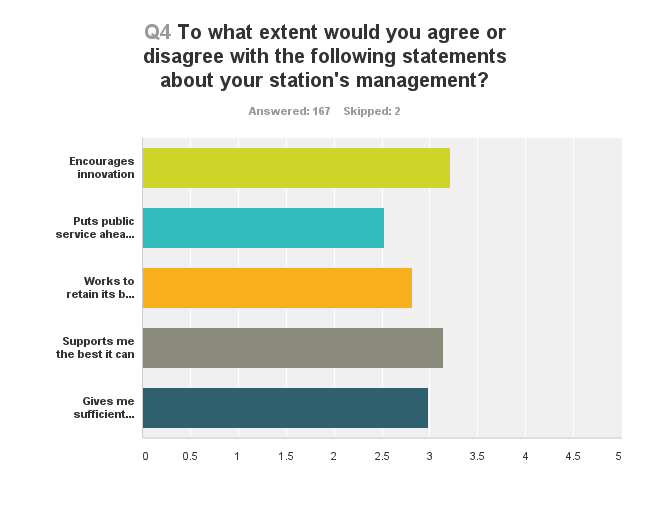 This is a great result for local broadcasting. Station management got high scores for encouraging innovation, supporting marketing and providing department autonomy. It’s a for-profit business so “puts public service ahead of ratings” and “retaining good people” scored lower. I’m not sure that public service and ratings are mutually exclusive, though. Perhaps we should have asked that question differently. 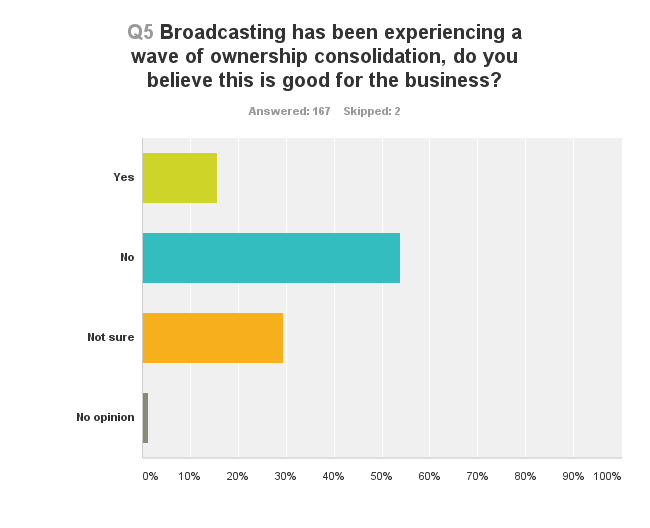 There were seven comments in the “good for business” category, most citing strength in numbers, economies of scale, increased leverage in negotiating with vendors and programmers as their reasons. One respondent did see the benefit this way.:

“As someone that works at a small group about to be gobbled up by a large group, I’m looking forward to having peers and resources to critique and brainstorm. To have others who do the same thing that I can look to and go ‘OK, what do you think about this?’ is going to be a great resource that I presently lack.”

There were seven comments in the “bad for business” category, most citing standardization, lack of diversity and bottom line journalism. One respondent saw it this way:

“With smaller staffs than one station USED to have, plus the addition of digital media, to make that claim is simply absurd. It is impossible to serve the public to the same degree.”

Three people say ownership consolidation as an inevitable response to the challenges of our business, a harsh reality that weight is strength from a revenue standpoint. As one respondent put it, “it may not be ‘good,’ but it does seem like it’s becoming a necessity in certain markets.”

Four folks think that ownership consolidation can be good or bad, depending on the ownership group, and “the amount of local autonomy granted to local management.”

My opinion based on my experience? Consolidation often means increased capital for new buildings, equipment and resources. It can also mean some people will lose their jobs due to redundancies, the hubbing of services like traffic and new technology like robotic cameras.
The group owners, and their employees, that successfully harness and share the accomplishments of each station across the group stand to gain the most from consolidation. 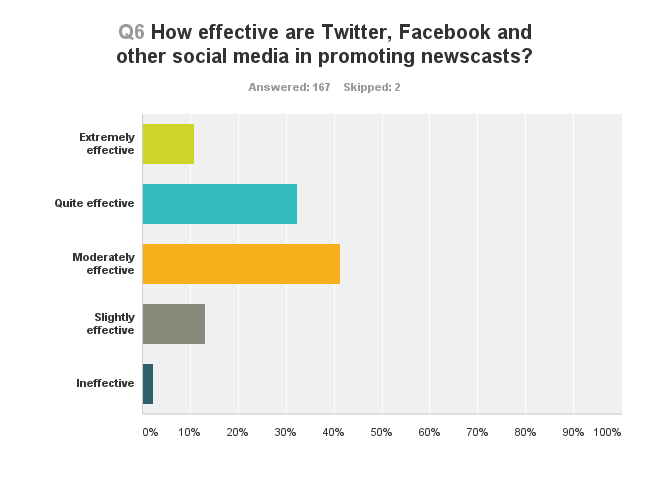 Social media scored very high as an effective means of promoting local news, with 83% of respondents finding it extremely effective to moderately effective. For my money, the emergence of social media as a tool for recruiting news viewers and generating news stories is a huge, no-cost advancement. Stations that embrace and use social media to its full potential create strong connections with viewers throughout the day and night that can pay off in increased news viewing. 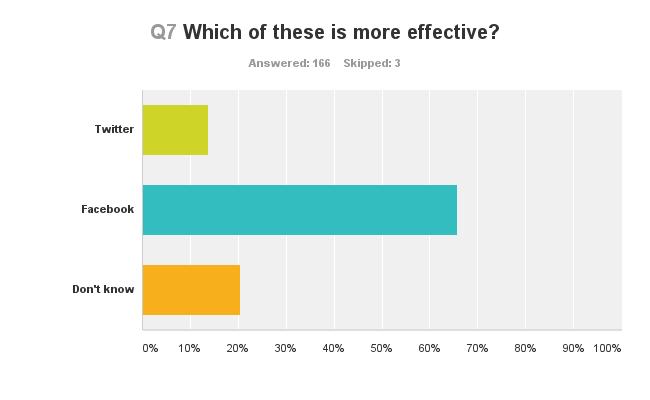 Tomorrow, what CSDs think is their greatest challenge, what news element is most important for attracting new viewers, and grading outside media and research.