We all know how advertising on TV stations can increase sales for local businesses. But what if a local client’s budget is modest and the results it’s looking for include growth in social media, useful data, and of course, sales? How can TV stations help businesses with more narrow, specific goals? How about an online […]

We all know how advertising on TV stations can increase sales for local businesses.

But what if a local client’s budget is modest and the results it’s looking for include growth in social media, useful data, and of course, sales?

How about an online contest, like the one WPSD, the NBC affiliate in Paducah, Ky., owned by Paxton Media, conducted for a local, independent, grocery chain, Banks Market?

Banks Market was looking for help in rebranding after a name change. But it also wanted demographic information about its customers, including what influenced consumers’ shopping decisions.

Viewers were encouraged watch WPSD’s morning newscast for the key word of the day. Those viewers then went to WPSDLocal6.com to enter the key word and were given a chance to opt in to Banks Market’s database for future messages about specials and featured items. The key word was also posted to WPSD’s Facebook page along with a link to enter. 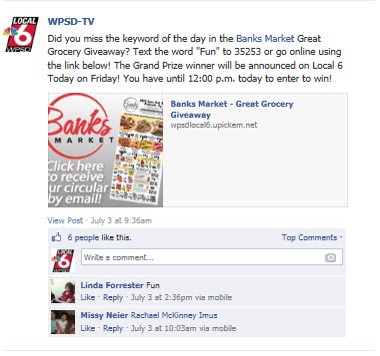 “Their software gave us the ability to ask questions,” Droke says, which was instrumental in providing Banks Market with research information about shopping decisions.

During the campaign, Banks Market saw a 26% growth in its opt-in database. Its online circular page visits increased 40% during the contest and 80% the following month. Banks Market Facebook “likes” went from about 100 to more than 1,200.

“I was really amazed,” said Dale Farley, Banks Market general manager, “how much, in a month’s time, we had actually increased that.”

The intangible results of the contest determined important factors that drove shoppers’ preferences, information that Banks Market can use to attract more customers.

And sales? Banks Market’s sales increased 14% during the first four weeks of the campaign, and shot up 22% in the fifth week, the grand prize giveaway week.

Banks Market outpaced other independent grocery store chains in sales during the giveaway.

“Sometimes with advertising, it’s hard to see the results,” said Farley. “We’re very pleased with these results, and we would do it again.”