Last night at 5:56, Meredith’s WGCL Atlnata launched a bold, new feature in its 5 p.m. newscast — Just a Minute — that’s unprecedented in local TV news. The CBS affiliate is featuring 10 former Atlanta TV anchors and reporters to presenting a one-minute commentary each at 5:56 every weekday afternoon. (NOTE: One of the […]

The CBS affiliate is featuring 10 former Atlanta TV anchors and reporters to presenting a one-minute commentary each at 5:56 every weekday afternoon.

(NOTE: One of the Just a Minute team, Amanda Davis, took a leave of absence from the project after being charged with DUI Monday morning.)

The anchors and reporters are well-known and long-standing journalists gathered from WGCL’s competition, but who no longer work for those stations.

“We urge them to be provocative and controversial, says Mark Pimentel, WGCL’s general manager, “so there is no subject that is off limits.” 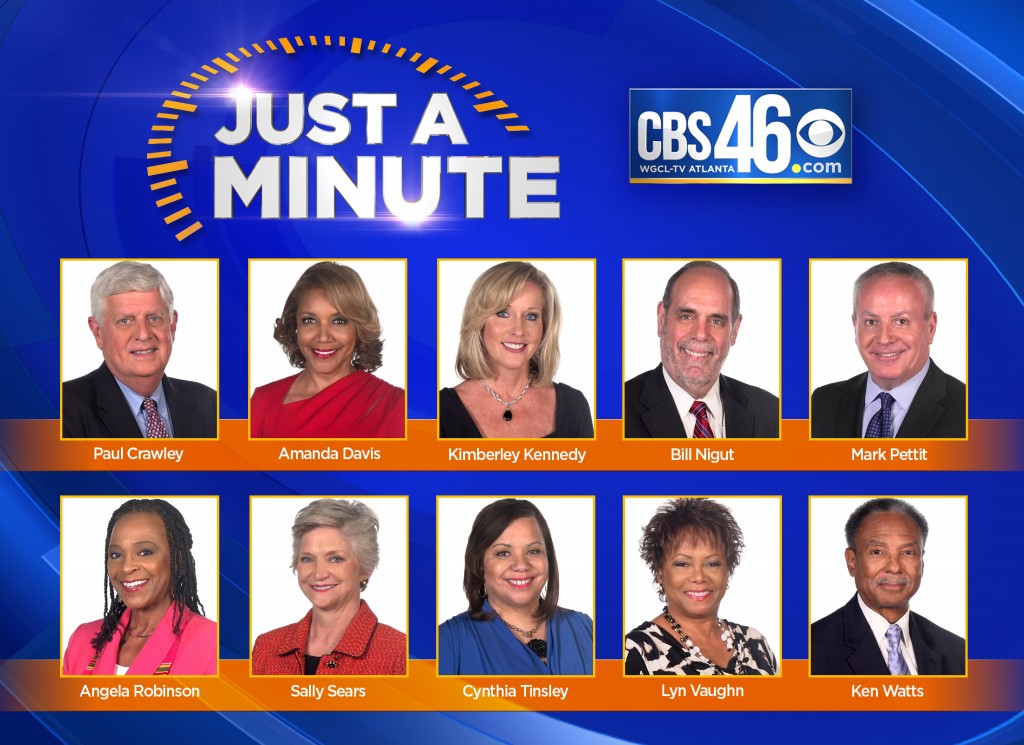 The Just a Minute team features anchors and reporters from the market’s NBC affiliate WXIA, the Fox affiliate WAGA and the ABC affiliate WSB.

“These are great, well-known journalists,” says Pimentel, “and it’s fun to have them under our roof.”

Pimentel says the idea come to him on a bike ride.

“I had done commentary as a general manager for five years, and it just occurred to me on this bike ride, I’ll get a group of anchors and reporters to do commentaries.”

Pimentel, a former news director at WXIA and executive producer at WSB knew most of the Just a Minute team personally.

“We obviously urge them to take a stand on the issues,” says Pimentel, “we’re interested in them actually having an opinion.”

Cynthia Tinsley, former anchor and reporter for WXIA, says that when Pimentel approached her with the idea, she was intrigued. “I did take a day or two to think about it though,” she says.

Tinsley says she was used to being a journalist, telling both sides of the story. So at first, she was wary about giving her opinion.

“I can talk about things that are newsworthy,” says Tinsley, “but now I can talk about it from my point of view. As a journalist, that’s the opposite of what you usually do.”

Tinsley’s commentary aired last night, the first in the series.

“I think it’s going to add another dimension of storytelling than what’s already being done.”

Pimentel admits that there is a self-serving angle for Just a Minute. “We hope it leads to some sampling,” he says. “We hope it will create some tune-in to see these well-known people and their perspective on critical issues.”

When I asked Tinsley what she hoped viewers would gain from Just a Minute, she says, “I hope viewers get the sense of looking at the news from a different lens. To look at a story and not think in terms of just black and white, but see the shades of grey.”

Pimentel says there is a reason Just a Minute is scheduled and promoted as airing at 5:56 p.m.

“There’s a purpose to it. It’s the last element in the 5 o’clock news, and the 6 o’clock news will start literally coming right out of it.”

“I think we’ve lost the art of that. And I think doing something like this may spark that kind of healthy debate.”