If you’re sitting in front of your TV watching your favorite programs on any TV station, chances are you’ll see a news promo about what stories that station is covering in an upcoming newscast. And prior to Facebook, that was generally the only way local TV news operations could recruit viewers with specific content. Those […]

If you’re sitting in front of your TV watching your favorite programs on any TV station, chances are you’ll see a news promo about what stories that station is covering in an upcoming newscast.

And prior to Facebook, that was generally the only way local TV news operations could recruit viewers with specific content.

Those people had to be in front of their TV.

Of course, a sizable audience of news viewers are going to watch news at the times they know the newscasts are airing, regardless of whether they’ve seen any news topicals or not.

Facebook is now the new news feed that you have personally tailored for you with the information you want and value from your people — family, friends, co-workers, TV stations and other sites you like and follow.

Facebook lends itself to giving access not only to the story development, but to the behind-the-scenes of the reporters, anchors and weather forecasters as they are advancing the story.

And TV stations have recognized that and are trying to convert Facebook users to also be local TV news viewers or website users, which pay the bills.

And since TV stations are experts at all things video — shooting, editing, sharing, posting — a key driver on Facebook, it’s a natural fit.

In a series of interviews for a weekly report called, Social Scorecard, which is on TVNewsCheck’s sister publication, NetNewsCheck, I interviewed social media experts at stations that are the leaders on social media in their respective markets, West Palm Beach, Jackson and Tampa.

And I thought it might be cool to take a second look at what was in those articles, just in case you might have missed them, and to include additional insights that ended up not being used.

How do they use Facebook to drive audience to websites and broadcasts?

At WTVT, the Fox O&O in Tampa, they’re wary of teasing on Facebook.

“Our audience does not respond well to teasing,” said John Hoffman, WTVT’s VP of news. “Our folks call it click bait and our users can tell it a mile away. We used to do that, but we’ve developed [Facebook] into one of our platforms for informing.”

“We do use Facebook as a promotional tool, quite heavily, especially during sweeps,” said Eric Weiss, WPTV’s director of new media.

“We create our own unique promos for Facebook that help push our TSRs, separate videos from what we put on air that promote our broadcasts, more tailored to the Facebook audience, very visual and not dependent on sound.”

In Jackson, Miss., at WLBT, the Raycom-owned NBC affiliate, video is key to getting users to cross platforms.

“Absolutely, anything with video,” said Mary Grace Brantley, WLBT’s digital content manager. “We don’t give away the whole story in our social media posts. I’ll edit a little clip and say, ‘click here to watch more’. We try to write it in a way that’s extremely creative and why readers should be interested in it.”

What story topics have proven to work well on Facebook?

“Stories they can relate to and share with their friends and family,” said Weiss, “the shocking animals always do well. Our audience is predominately women, so we try to take that in mind when we post.” 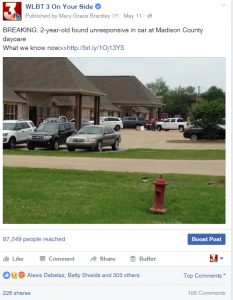 “One of our major stories was a child that was found unresponsive in a car. Originally, all I know is that a baby was unresponsive in car, we have a reporter on scene, had the live stream online and said ‘turn on the TV right now and watch’.

“That was a huge story for us on social. That was the top story over the summer for the company.”

Tomorrow in Part 2, we find out how stations increase Facebook engagement, what role the Facebook accounts of anchors and reporters play, and why one eyewitness interview reached almost 40 million people on Facebook and it was never used in the news.