WICS, Sinclair’s ABC affiliate in the Springfield-Decatur, Ill., had more than double the social media actions as its nearest media competitor in the past six months according to data from audience insight firm Shareablee. WICS posted almost a half million total social actions in that period, accounting for 31% of the total engagement generated by […]

WICS, Sinclair’s ABC affiliate in the Springfield-Decatur, Ill., had more than double the social media actions as its nearest media competitor in the past six months according to data from audience insight firm Shareablee.

WICS posted almost a half million total social actions in that period, accounting for 31% of the total engagement generated by the DMA with more than 1.5 million social actions.

WAND, the NBC affiliate licensed to Decatur and owned by Block Communications, was second in social media actions in the same time period with almost 300,000.

WCIA, the CBS affiliate licensed to Champaign and owned by Nexstar, came in third in the same time period with almost 240,000 total actions, but led the market in actions per post with 88.

The News Gazette, a daily paper owned by Professional Impressions Media Group, led the market on both Twitter and Instagram with 7,272 and 9,043 actions respectively.

Kent Harrell, WICS’ news director, says Sinclair wants its stations to be aggressive on social media because it sees that as “a way to grow our ratings.”

Harrell says Thursdays nights are big on ABC stations so WICS has special reports in its newcasts that night, and starts promoting them three or four days prior.

And after the ratings books come out, Harrell says, “We will see that that was a good night. We know we threw a lot of aggressive promotion on our platforms. So we do have proof that those nights, we were strong.”

WICS’ Facebook strategy is driven in part by the station’s location being in Springfield, the Illinois state capitol.

“We have a lot of political news and that helps us balance out a story if we’re able to pull out comments, pro and con, for a certain issue.”

In the past six months, the station has been really pushing Facebook Live, which has helped with covering state house news. 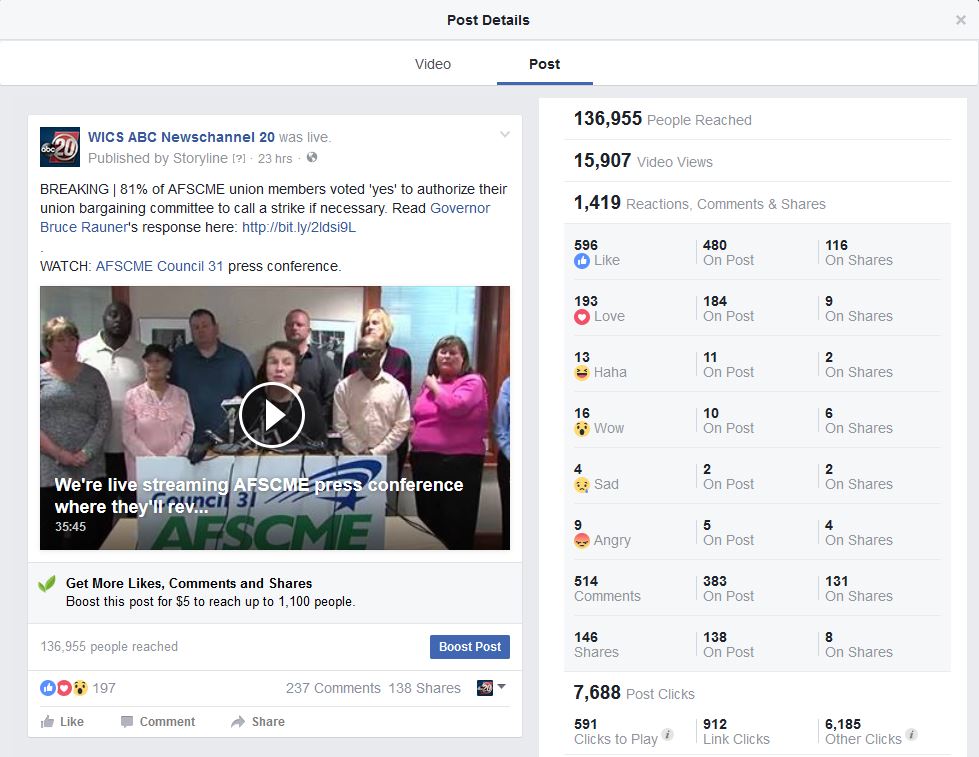 And Facebook Live has become an important component of the station’s daily news coverage as well, says Harrell.

To keep track of Facebook postings, the station has a social media wall.

“People in the newsroom are constantly looking at it and seeing what we’re posting on Facebook,” says Harrell.

Harrell also keeps track of who is posting to Facebook the most.

“Our meteorologists are probably the top digital media superstars. Then I would say a couple of our primary anchors do very well and then our reporters. We try to make it competitive. We always have a list of who’s posting what and who’s the most aggressive.”

The most important contribution Facebook is making to his station, he says, is the connectivity it allows with viewers.

“It does help local news. It makes us relevant. I’ve been doing this for almost thirty years and we’re able to connect to the viewers better now than we did years ago. “