A Connection With The Late Ron Savage

Ron Savage, news anchor and reporter at Fox O&O WJBK Detroit, died this past weekend while training with a local fire department, where he was a volunteer. Judging by the posts from his co-workers and viewers on WJBK’s Facebook page, Savage was held in high esteem and was much beloved. My condolences to his family, […]

Ron Savage, news anchor and reporter at Fox O&O WJBK Detroit, died this past weekend while training with a local fire department, where he was a volunteer.

Judging by the posts from his co-workers and viewers on WJBK’s Facebook page, Savage was held in high esteem and was much beloved.

My condolences to his family, co-workers and friends.

I did not know Ron, and we had never met, but we do share a connection.

I was reminded of it when I saw a Facebook posting showing a promo that I had written for Rom when he was the sports anchor in the 1980s at WTVD, the ABC O&O in Raleigh, N.C. It took me back to a time when I was just starting out in the local TV news marketing business.

In the mid-80s, I was the only writer for an ad agency that specialized in media marketing. and although a small agency, it had some heavyweight clients like many of the ABC O&Os around the country.

The owner of the agency was the legendary Mike Davis, now retired.

I was just a kid, way in over my head, writing news image spots for many of his clients.

And this spot for Ron Savage was one of my early efforts.

Sad news to report. Former ABC11 sports anchor Ron Savage has passed away. Our thoughts and prayers are with his family and his colleagues at FOX 2 Detroit: http://abc11.com/1775915/

The creative process that led to this spot followed a pattern. Davis would call me down to his office, notepad in hand, to brief me on the assignment.

I would then go off to come up with ideas, concepts, a line of copy, a visual, whatever I could think of that would hit the objective established for the assignment.

I looked for inspiration in cups of coffee and cigarettes, sometimes visiting a local diner in the middle of the night when the pressure was weighing on me.

Then a few days later, I would go back to Davis’ office and read off the scraps of ideas I had, from the sublime to the ridiculous. 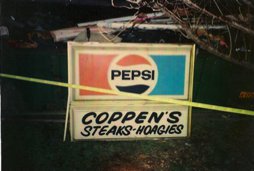 The inspiration for this spot, Always Thinking Sports, came from a gentleman, Joe Coppens, who owned a cheesesteak/hoagie shop on the corner of the neighborhood where I grew up.

In the towns and neighborhoods around the Philly -area, it was common to see a cheesesteak and hoagie shop on virtually every corner.

Whenever I went into his shop, Joe always had a small TV sitting next to the register with a game on. The Phillies, the 76ers, Eagles on Sunday afternoons, some local college games, whatever.

He wasn’t going to let making steaks and hoagies prevent him from watching the games.

If Joe had a bar, he would have invented the sports bar concept.

Joe even allowed me to play with his touch football friends, who were all much older and bigger, and often threw me passes.

So between cigarettes and coffee, I remembered Joe, and the line just kind of came to me.

Davis liked the idea and asked me to flesh it out, come up with some vignettes, scenes that supported the concept.

I’m not suggesting that this is an award-winning spot by any means, but thought I’d share how, in this case, and in that time, the creative process worked.

If you listen closely at the end, you can hear Davis’ voice as the announcer in Savage’s ear.

Peter Churchman directed the spot. Click here for a story I wrote about both Davis and Churchman and their contributions to news promotion.

So grab some coffee and smoke ’em if you got ’em, and let me know about your creative process.