What drives social media engagement in New Orleans? WWL-TV says weather — and sometimes gumbo, of course. WWL, Tegna’s CBS affiliate in DMA 51, leads in social media actions there over the last six months according to data from audience insight firm Shareablee. WWL has just over 3.3 million actions on social, 25% of the […]

WWL, Tegna’s CBS affiliate in DMA 51, leads in social media actions there over the last six months according to data from audience insight firm Shareablee.

WWL has just over 3.3 million actions on social, 25% of the total engagement generated in the market, with more than 13.6 million social actions. WWL also was first in actions per post with 259. 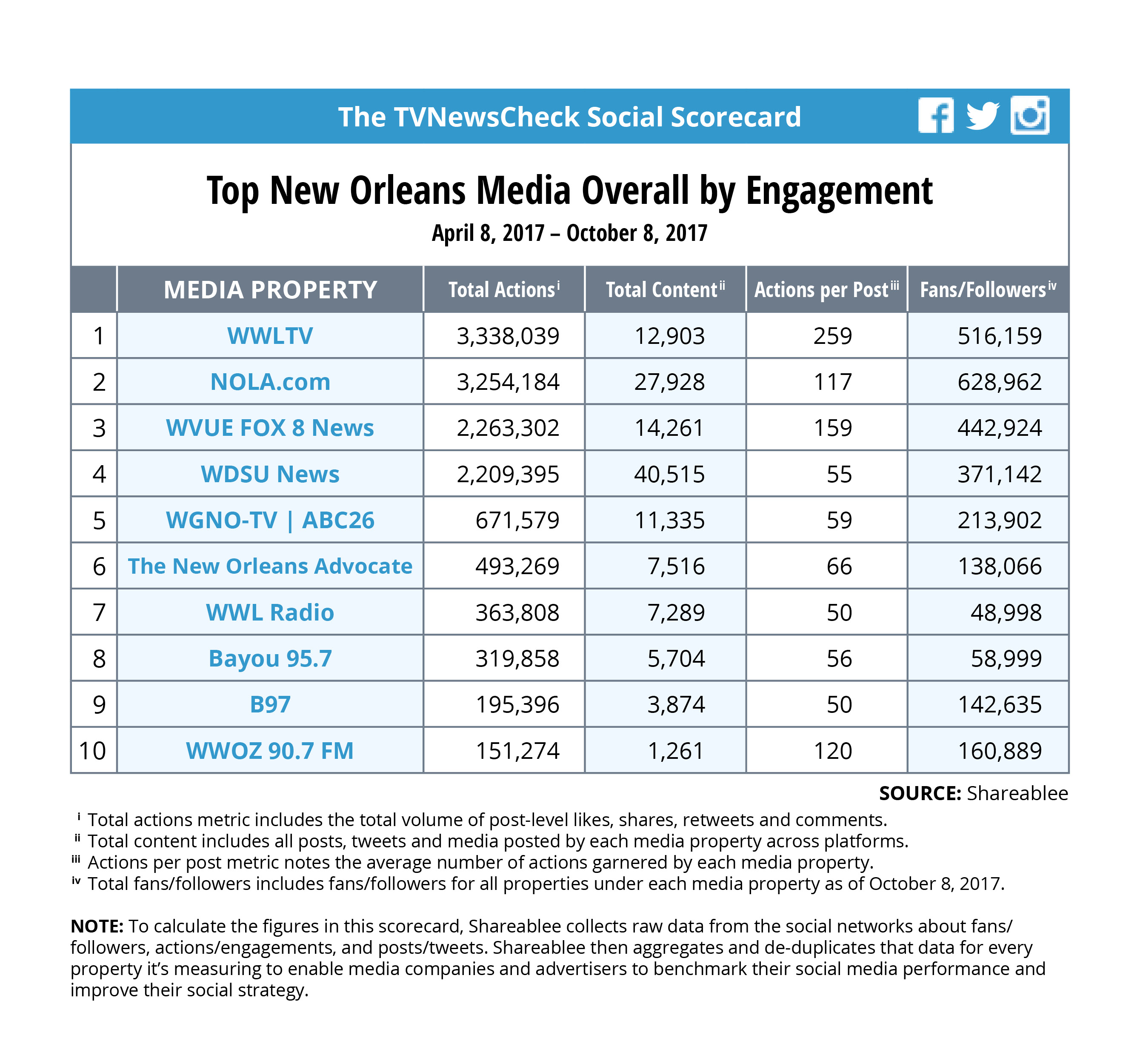 Tom Planchet, WWL’s digital director, says one of the main reason’s WWL leads the market on Facebook is due to the station’s use of Facebook Live.

“We have made a big push this year on Facebook Live because that’s what Facebook seems to be valuing and sharing a lot with people and, we have a lot of big, live events.”

The events Planchet references include some that the city plans for and welcomes, like Mardi Gras, and other events it expects from time to time, but doesn’t welcome, like hurricanes.

Regardless of what event it is, Planchet says it’s the immediacy of Facebook Live that attracts users the most.

Facebook Live gives the station another outlet for covering breaking news on the weekends, when programming commitments make it difficult to break into the scheduled TV lineup.

“We had two instances of flooding on weekends where the city was inundated and the pumps weren’t working,” says Planchet. “That’s how people get the news because on the weekends, there’s not as many scheduled newscasts, and sometimes they are preempted and delayed by sports. So we just we use Facebook Live”

In a city situated mostly below sea level, residents in New Orleans keep a steady and wary eye on the weather, especially when a hurricane comes ashore.

“One of our weather guys went every two hours and they do a full weathercast streaming on Facebook Live,” says Planchet.

“Our guys would answer questions that they would see in the feed, answer them verbally. Some may have missed our weather guy saying where the storm was headed and what was expected so they will jot down notes and we will be answering questions all along the way.”

One Facebook Live update on Hurricane Nate got 5 million engagements, which in a market the size of New Orleans, is huge, says Planchet.

“During the recent hurricane, we had a reporter come on the air every half hour or hour sharing what people were seeing themselves through their Facebook posts,” Planchet says.

The removal of Confederate monuments back in May stirred a lot of emotions and the station displays the comments from controversial events like that via Tag Board.

“We followed to see where that monument was going to be taken and it was taken into a salvage yard and people were very upset about it.”

Food is not just for sustenance to the people who live in New Orleans and the surrounding parishes. It’s a way of life.

So a recipe for healthy gumbo? Now, that’s controversial.

“I mean the reactions were insane. Some of the comments you can’t repeat, but some of them were like, ‘hell no, this isn’t real gumbo’.’”

And allegiance to their favorite ice cream can cause quite a stir on Facebook as well.

“Blue Bell is a regional ice cream,” says Planchet, “but it’s pretty well known down here and they do a new flavor or two every year. This year, they did something called Bride’s Cake and in New Orleans, it went like crazy. They sold out of it in hardly any amount of time. And when Bride’s Cake came back to the market, they made it just for Louisiana.”