KDFW, the Fox O&O in Dallas, dominated social media actions in the market over the last six months according to data from audience insight firm Shareablee. KDFW has just over 13.5 million actions on social, 36% of the total engagement generated by the DMA, with more than 37 million social actions. KDFW was also first […]

KDFW, the Fox O&O in Dallas, dominated social media actions in the market over the last six months according to data from audience insight firm Shareablee.

KDFW has just over 13.5 million actions on social, 36% of the total engagement generated by the DMA, with more than 37 million social actions.

KKDA-FM, (K-104), an urban contemporary station owned by Service Broadcasting, leads the market in Instagram with over 550,000 actions. 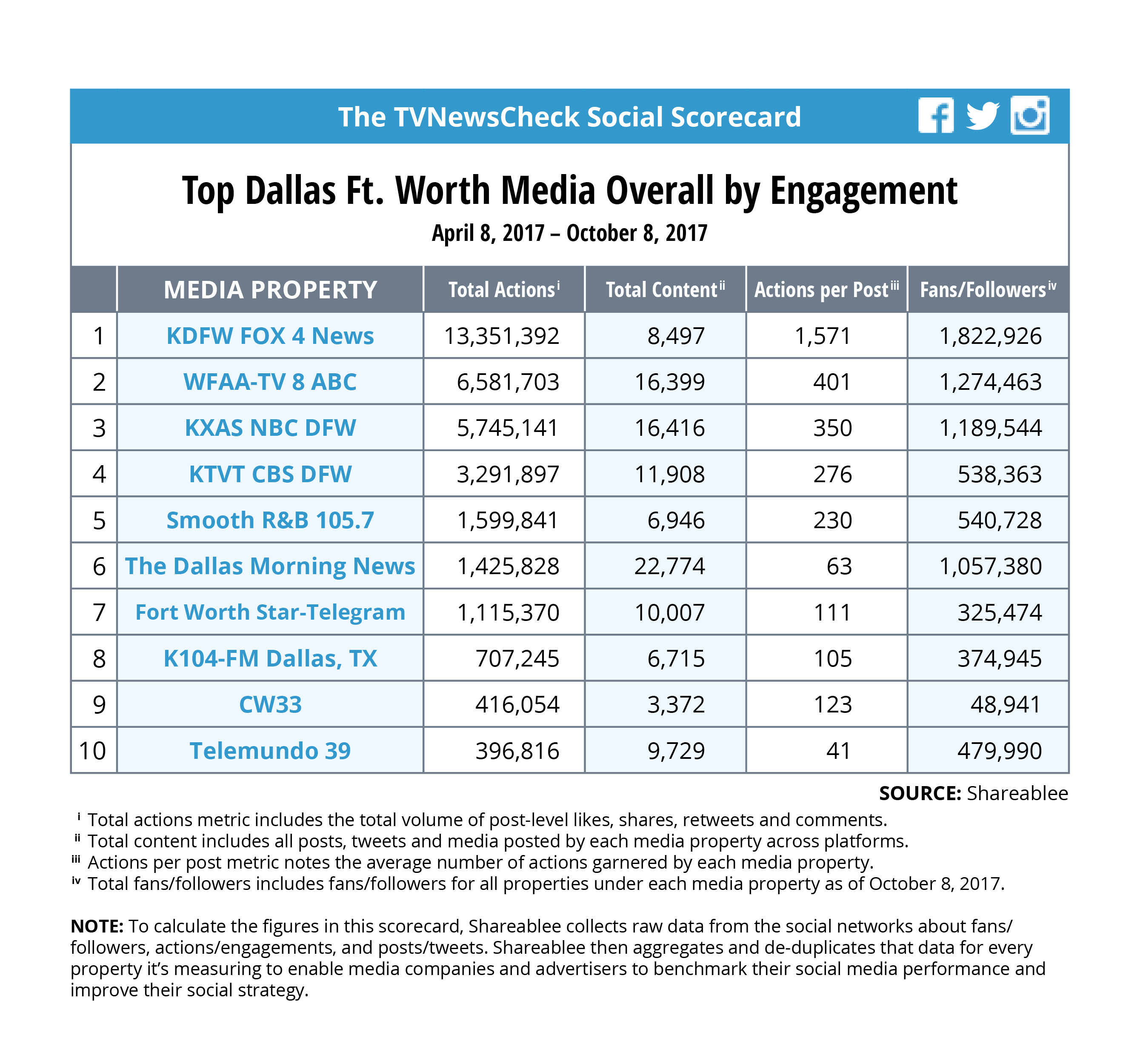 How is KDFW able to dominate the market on Facebook so completely, literally doubling what its nearest competitor gets?

It starts with having a legitimate history of listening to its viewers, says Bruce Smith, KDFW’s assistant news director.

“We have been a very interactive station with our viewers for a long time that far proceeded social media. We have a franchise called Viewers Voice which has been around for 18 years, which got its start from people calling into the newsroom commenting about a story. Now, Facebook is just simply another platform where we can interact with our viewers.”

Mark Norris, KDFW’s senior web producer, says one reason the station is so successful on Facebook is because they know what people want. And what they want are local stories about people

“Crime stories, we do those. They can be horrifying, but it’s following up and figuring out what’s the human element of this” that is key.

“The other side of it is finding the people who are doing exceptional things. We want to showcase people doing good in the community, positive stories. But, bottom line, it’s people either way.”

Norris says that the amount of posts KDFW generates is only half what the other stations do, yet what they post scores high engagement. “We know what works and we know what connects, and we know how to ride it.

“I would say the biggest example of that would be the July 7th anniversary of the shooting of the police officers here in downtown Dallas. That was a really horrible time here.”

Norris says KDFW’s approach was not to relive those moments, but to honor “the memories of people who lost their lives.”

Sometimes, a story that shows high interest and engagement on Facebook, will prompt KDFW to give it added coverage in its newscasts.

Smith says the story of a missing 3-year-old girl is an example.

“Obviously, there’s great interest in that story. She has still not been found. So each day, that story continues to be one of the top posts. Based on that information, we have continued to put a reporter on that story every day.”

“We are not afraid to use Facebook Live, but we do not use it nearly as much as a lot of people do. A lot of stations use Facebook Live, it’s a way of life for them. They will Facebook Live anything and everything. To us it is a tool. If there is a situation that deems us using it, then we will go for it.”

Norris points to an example, the controversy over the removal of a statue of Robert E. Lee.

“Instances like that when there is a major story that’s been playing out, we will go live. It has to be a good and special reason for us to go live on Facebook.”

KDFW does, however, use Facebook Live regularly featuring the station’s main anchor and meteorologist.

During severe weather, there are times that the severe weather doesn’t warn us cutting into programming,” says Smith, “but it’s severe enough our meteorologist will frequently be doing Facebook Live.”

Ultimately, Norris says the station’s success is based on its presentation.

“The way we do it is very concise, very clear, letting people know what’s going on.”