In this week’s Social Scorecard, how WTVF is more than 2 million actions ahead on Facebook in Nashville. WTVF, the Scripps-owned CBS affiliate in Nashville owned by Scripps, has twice as many social media actions as its next nearest competitor in the market over the last six months according to data from audience insight firm […]

In this week’s Social Scorecard, how WTVF is more than 2 million actions ahead on Facebook in Nashville.

WTVF, the Scripps-owned CBS affiliate in Nashville owned by Scripps, has twice as many social media actions as its next nearest competitor in the market over the last six months according to data from audience insight firm Shareablee.

WTVF has more than 5.2 million actions on social, 36% of the total engagement generated by the DMA (No. 27), with more than 14.4.million social actions. WTVF also led the market in actions per post with 436. 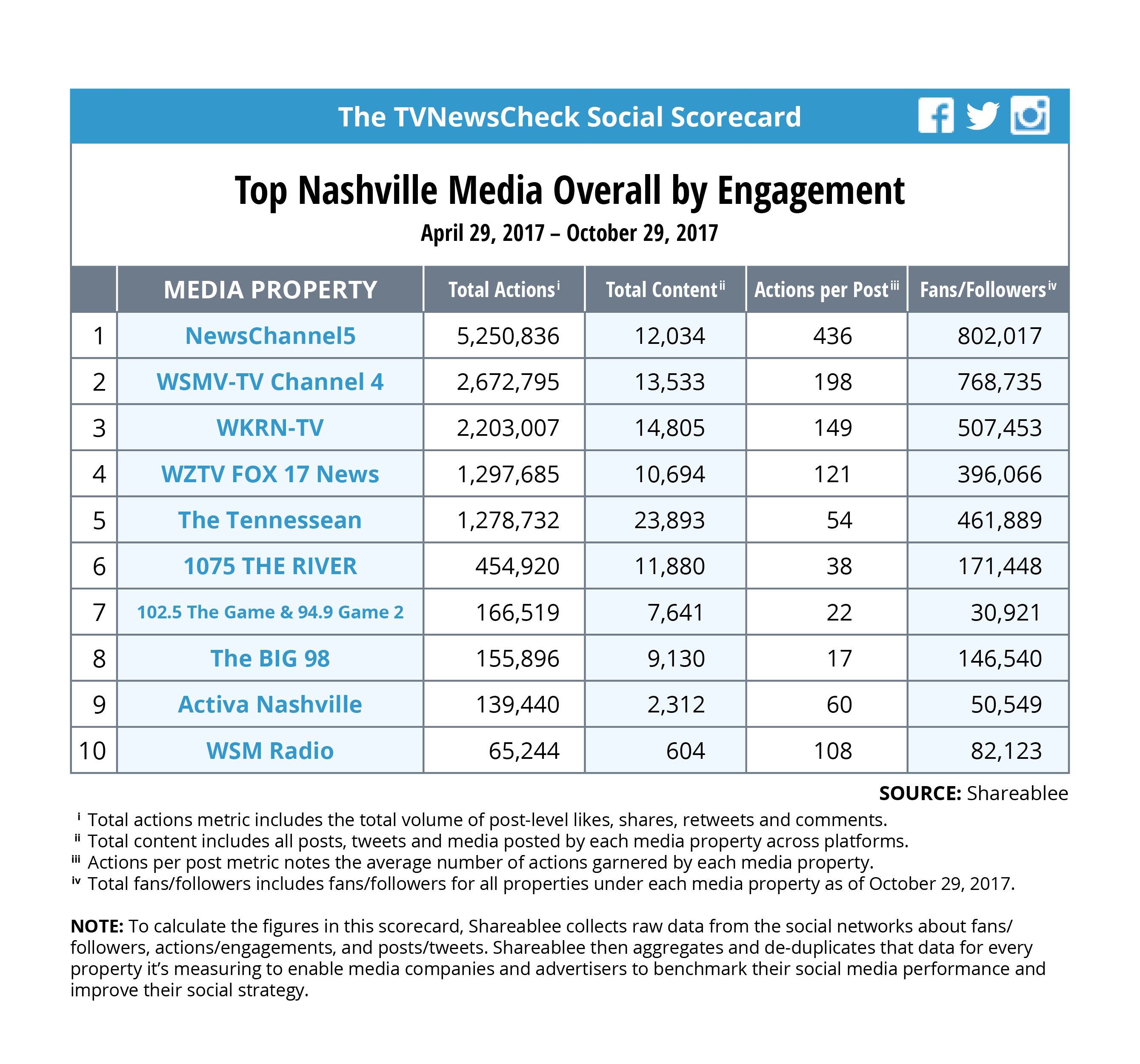 So how has WTVF able to dominate the Nashville market so thoroughly on Facebook?

WTVF’s management team says including their Facebook users in the electronic news gathering process, prudent use of Facebook Live and monitoring the various Nashville community Facebook pages are significant attributes to its success.

“There is definitely an opportunity on Facebook and Facebook Live to involve viewers in the process of news gathering,” says Sandy Boonstra, WTVF’s news director.

Jared Turner, WTVF’s new media director, says taking the viewer to the scene of breaking news allows the audience to experience the story at a different level.

“The audience can experience the news story along with our field producers as it happens,” says Turner, giving them a perspective not seen in the “polished finished product.”

“When reporters go out on breaking news,” says Sierra Barnett, WTVF’s digital marketing manager, “that’s one of the first things they need to do when they get on the scene is to jump on Facebook Live to kind of set the stage for the viewer, let them know where they are, what they are checking out.”

“We had some White Lives Matter protests and counter protests a few weekends ago and we pretty much used digital in our social platform to tell that story. I think that that can give people an insight as to how you do the job and then they are more interested in eventually watching whatever it is you do on broadcast.”

When the weather is severe, Boonstra says the station uses Facebook Live to reach people who may not be in front of a TV screen.

“Often times there will be flooding here in Nashville and so any time there is a flooding situation, we know that seeing Facebook Live is fast and that’s where some of our viewers are and it’s potentially lifesaving.”

For many stations, Facebook is a source for story ideas that broadens their news coverage and content, says Barnett.

“One story that came to us from our Facebook followers was a local Vanderbilt nurse who a family member caught on video singing to a patient. That resonates with people. We look for those moments that have emotion and we kind of lead with that.”

WTVF’s reporters also scan the Facebook pages of local neighborhoods around Nashville to find those hyper-local issues that are of concern to people.

“These groups are very well established,” says Barnett, “and people are constantly sharing information. It’s a great place for us to find stories and build that relationship.”

When it comes to using its Facebook page as a marketing tool to push users to newscasts, Barnett says quality content is most important.

“Of course we will do posts that promote stories, posts that are about tune in. But primarily our goal is to build organic content on Facebook, sort of a miniature story of what we are going to tell on-air later in the afternoon. That’s kind of how we approach our content marketing.”