WISC, the CBS affiliate in Madison, Wis., owned by Morgan Murphy Media, commands a slight lead in social media actions in the market over the last six months according to data from audience insight firm Shareablee. WISC has more than 1 million actions on social, 32% of the total engagement generated by the DMA (No. […]

WISC, the CBS affiliate in Madison, Wis., owned by Morgan Murphy Media, commands a slight lead in social media actions in the market over the last six months according to data from audience insight firm Shareablee.

WISC has more than 1 million actions on social, 32% of the total engagement generated by the DMA (No. 81), with more than 3.2 million social actions.

WISC also leads on Instagram with more than 11,000 actions.

WKOW, the ABC affiliate owned by Quincy Media, led the market in actions per posts on Facebook with 89.

WMHX-FM, (Mix 105.1), a hot adult contemporary  station owned by Entercom, led the market on Twitter with more than 11,000 actions. 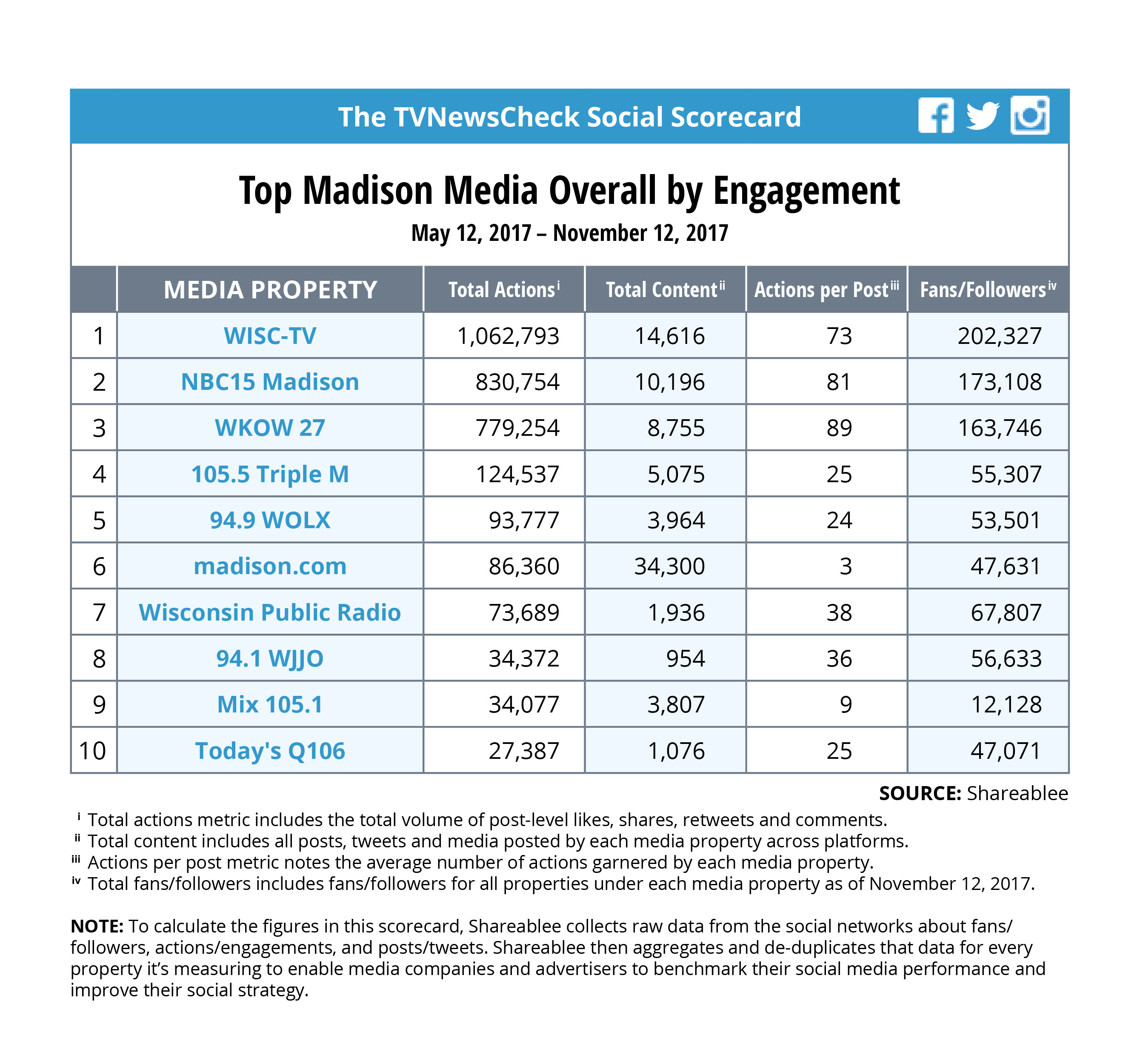 Colin Benedict, WISC’s news director, says the station’s aggressive response to breaking news is one of the reasons for its success on Facebook.

“Breaking news is what connects people and it’s our bread and butter and so it’s what we do really well. We had a home explosion here and we were all over that, first on the scene, first to get a live picture to Facebook.”

“We just provided the viewers a glimpse of what was going on on the scene and this is the type of thing that people are going to respond to,” says Benedict.

“We know that we need to be first in breaking news and breaking weather and so we have a team that’s really focused on that.”

“We don’t look at our market exclusively. We actually compare ourselves to all television and all media in Wisconsin. Our goals are to compare ourselves against all statewide media. So when we look back at engagement over the last six months or roughly the same period, I think we are fourth or fifth in the state of Wisconsin.”

And sometimes, WISC will go wherever there is a story to tell.

“We had a reporter here that went down and covered Hurricane Harvey in Texas. She did a Facebook Live from the middle of someone’s house that had been virtually destroyed and the way that she conducted the story where she is walking the viewer through, talking to the viewers, talking to the home owner all simultaneously by herself with her phone was tremendous and I think it’s the type of storytelling that we believe really suits Facebook.”

One of the strengths of Facebook Live is its ability to interact with people in a first-person storytelling situation.

“It’s not simply a raw picture but she is narrating this,” says Benedict. “Then you have this added component of being able to connect with people and talk with them in real time.”

Talking to people in real time via Facebook Live, says Benedict, works well when people have questions about a story that might affect them.

“In the wake of the Equifax hack, we are getting so many comments from our viewers saying, I don’t understand this, I need more information. So we decided to do a Facebook Live that was essentially where we brought experts in and then we did it almost like a town hall that the people asking the questions were on Facebook, then we had an anchor presenting that to the experts and it got pretty good engagement.

“To me fundamentally part of our mission here is to serve the public and I think we have to look at Facebook as another opportunity to do that and so I was proud of us being able to give information to our audience in a format that probably wouldn’t have worked quite the same way on television.”

WISC regularly streams a Facebook Live session in the morning.

“Our morning anchors conduct a Facebook Live from the desk every morning,” says Benedict, “and they will talk to viewers as they are conducting the newscast. There is an audience there that is interested in having that relationship while they are watching us on television and they find value in that.”

Talking to viewers and getting their feedback on Facebook gives WISC opportunities to be more responsive to what its viewers want, something that wasn’t always the case before Facebook.

“We see it as an opportunity to interact with our viewers,” says Benedict. “That was not always the case. You did a story, it aired on the six o’clock news, you weren’t entirely sure how it was received, and you went home. This makes us a news organization that’s more responsive and understands its audience better.”