What It Takes To Create Quality News Topicals

This is Part 2 of a five-part series, Building Viewership with News Topicals. Read Part 1 here. Being a news topical writer/producer is one of the toughest jobs in local TV news marketing. And to do that job well, the experts say, you need to have a passion for journalism, a thorough knowledge of what […]

This is Part 2 of a five-part series, Building Viewership with News Topicals. Read Part 1 here.

Being a news topical writer/producer is one of the toughest jobs in local TV news marketing.

And to do that job well, the experts say, you need to have a passion for journalism, a thorough knowledge of what news is covering in the newscast, the ability to recognize what stories will resonate with viewers, and the confidence to promote those stories even if they’re not the news department’s top stories.

“We look for someone who enjoys and understands and is into news,” says David Hershey, creative services director at KTVT, the CBS O&O in Dallas.

“If they have that hunger for news, that’s a huge first step. They know the news cycle, they can write, do some editing, have a rapport with the folks who work in the newsroom. Developing that back and forth between news and promotion isn’t something that can be easily taught. You have to find folks who have the right disposition to do that.”

Sean Garcia, the marketing director at WFTV Orlando, Fla., a Cox-owned ABC affiliate, says: “They’re the people who have the biggest opportunity to flow audience from our lead-ins. They’re in the trenches, they’re the ones dealing with reporters all day, dealing with executive producers, they are our point of contact in the field, to know what’s going on, so they’re incredibly important.”

“They’re proud of the newscast, the stories. They’re not going to be thinking of it from a cynical advertising perspective. They want people to watch it because they think it’s good.”

Garcia says he’s “looking for someone who can decide what stories resonate with the viewer. They need to tell the news producers that this is what we need to be promoting tonight and here’s why. It may not be the news department’s top story.” 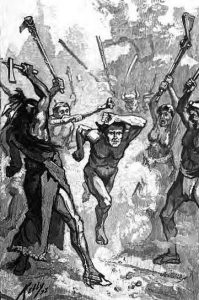 That can be a tall order, to go up against veteran news executives with strong personalities.

“They have to be able to not be push overs,” says Dobbs. “You have to be decisive and fight for what you believe is going to resonate with the audience.”

Dobbs adds that news topical writer/producers often have to run a gauntlet.

“You have to run here, run there, talk to this person, that person, so you have to have persistence. So much of doing topicals is that you know everybody on the staff.”

Knowing everyone on the news staff is a huge asset for a topical writer/producer, as it goes a long way to gaining their respect, and having confidence in you.

Jesse Stevens, a writer/producer at Gray’s CBS affiliate WDBJ Roanoke, Va., is new to promotions, but he has been at the station for two years, starting in production.

“I used to work with just about everyone in our newsroom. I had relationships going into this job and I’m thankful for that now. That’s been a big benefit.”

His advice is to really understand the story you’re promoting, “find that angle that might not be apparent on the surface to make it interesting to someone.”

The consensus is that producing topicals day after day, night after night, can be a grind.

“It’s one of the toughest jobs in the building, to be honest with you,” says WFTV’s Garcia. “The stress level, the pressure, the deadlines — a lot of them have to write, shoot, edit, get the spot on air,” he says.

Newcomers in smaller markets often have no training, he says. “So, you see a lot of stress on these people. How are they going to tell that unique angle of the story, so the viewer can be interested in watching?”

“I think they are probably the most important members of the team.”

Coming up in our five-part series:

Tomorrow: Finding topical writer/producers and keeping them motivated.
Friday: Creating effective topicals and when best to air them.
Monday: How Facebook is changing topical news promotion at some stations.