In this week’s edition of Social Scorecard, WTOL reveals how it executed a plan based on research that led to its top Toledo’s social media scene, especially Facebook. WTOL, Raycom’s CBS affiliate in Toledo, Ohio, has three times as many social media actions as its next nearest competitor in the market over the last six […]

In this week’s edition of Social Scorecard, WTOL reveals how it executed a plan based on research that led to its top Toledo’s social media scene, especially Facebook.

WTOL, Raycom’s CBS affiliate in Toledo, Ohio, has three times as many social media actions as its next nearest competitor in the market over the last six months according to data from audience insight firm Shareablee.

WTOL has almost 2.8 million actions on social, 67% of the total engagement generated by the DMA (No. 78), with more than 4.1 million social actions. 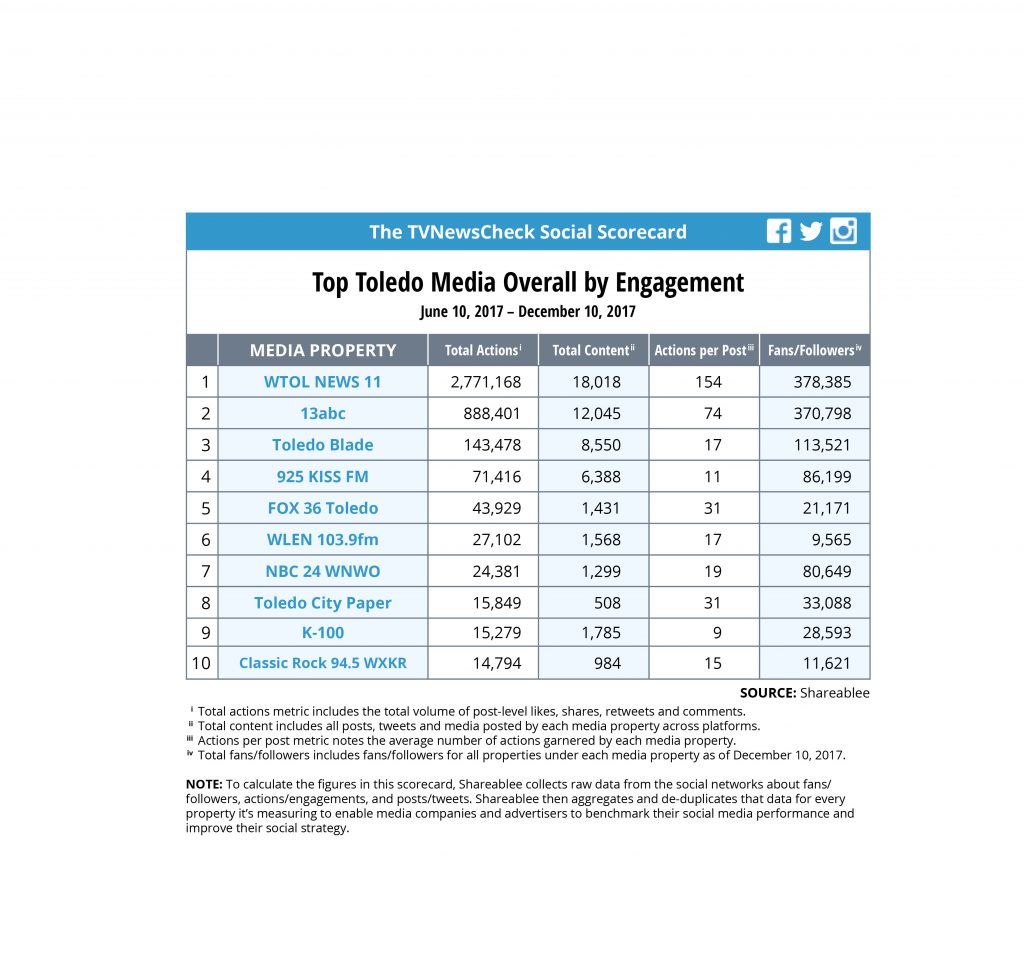 Rarely does one media outlet in any given market outpace all the others on Facebook as much as WTOL does in Toledo. So what is the secret to its success?

“We do have knowledge what’s going to connect on Facebook,” says Rost. “So, of course, we know stories that we think are going to resonate better.”

“We had a story last night regarding three young boys who were missing. The Facebook platform gave people a chance to connect with that story, hugely emotional story for so many people. That’s our focus in the news department, to find the humanity in these stories and the digital platform is tailor-made for that.”

Weather is another topic for Facebook Live that WTOL uses to connect with its followers.

“Every Sunday night we have the Weather Hangout” with Meteorologist Ryan Wichman, says Rost.

“It’s not just him doing a Facebook Live and saying here are your conditions right now, but he is engaging with those consumers. If they ask questions, he is responding to them. So it really solidifies that two-way conversation with the consumer.”

“Medical marijuana is a big issue in Ohio. We asked for comments from our audience on that. It ended up being, if not the top post in the state of Ohio, one of the top three.”

And cute and cuddly news stories also do well, says Knopps. “We did a Facebook Live yesterday and it wasn’t anything earth shattering. It was about the Humane Society getting close to a record 4,000 adoptions. We were out there, we did a Facebook Live and the engagement level on that was higher than I expected. Anything with dogs and people on Facebook, people are going to comment about it.”

Comments from WTOL’s Facebook followers are sometimes used on the station’s newscasts to help drive engagement.

“It closes the loop. Not only are they sharing it with their peers on a digital platform,” says Knops, “but now they are being shown on a broadcast platform and if people see that then they may be more likely to engage the next time on the next story or even on this one.”

Rost says while Facebook is not the platform to launch the station’s investigative reports, it is the place to promote them airing on WTOL’s newscasts.

“Every single TSR (Targeted Special Report) that we did in the month of November had a digital first play. We put it out three days before the content even ran on air.”

Knopps points to one story that really resonated on Facebook, how parents behave at high school sporting events, that led to more news coverage on TV, and eventually, good results.

“We actually did a story talking with athletic directors and referees about just the anger. It led to an officiating shortage. It led to a follow-up story and to one of the conferences here making changes in trying to get more referees. It’s crazy, but if you do a story like that, the payoff is it led to change.”