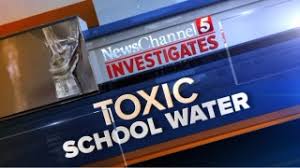 WTVF, Scripps’ CBS affiliate in Nashville, earned a National Headliner Award for a 2018 investigative series that uncovered toxic water in a Tennessee school district. Founded in 1934 by the Press Club of Atlantic City, the National Headliner Awards program is one of the oldest and largest annual contests recognizing journalistic merit in the communications industry.

The investigative series was published as a series of digital and on-air reports that garnered attention from national news outlets, culminating in a primetime special that aired on WTVF last year.

As a result of WTVF’s reporting, state lawmakers passed a law that will require every school district in the state to test for lead in its drinking water.

“An incisive piece of investigative journalism, reporter Phil Williams’ story on toxic levels of lead in Nashville’s Metro school district reminds us of the power of journalism to check unscrupulous officials and to ultimately save lives,” said the National Headliner Award judges.

“The persevering reporting by the WTVF team underscores the watchdog role journalism plays in our society and the critical impact it can have,” said Brian Lawlor, Scripps’ president of local media.

“We applaud the team’s continued tenacity to bring this issue to light for the people of Nashville and challenging those in power.”