On Memorial Day, May 27th, a record 18 tornadoes touched down in the Dayton area. On Thursday, May 30th, WXIX, Gray’s Fox affiliate in Cincinnati, produced a telethon to help the victims. “Though Dayton isn’t in our DMA, WXIX serves a great deal of the southern Dayton market,” said Dom Nardo, WXIX’s creative services director. 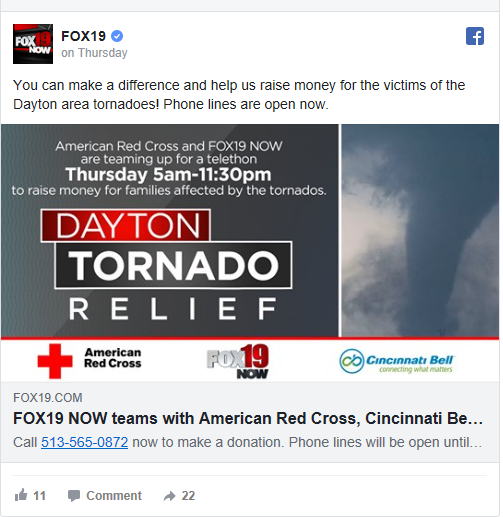 On Memorial Day, May 27, 18 tornadoes hit the Dayton area, setting a new record for the highest total for twisters in a single, local event in recorded history, according to the Cincinnati Enquirer.

One tornado reached an estimated maximum wind speed of 170 mph making it an EF4, the second strongest on the enhanced Fujita scale.

Dayton is about 60 miles north of Cincinnati.

“We wanted our neighbors to the north to know Cincinnati and Tri-State viewers were here to support them as they recover. FOX19 NOW, along with our partners, raised nearly $77,000 in just one day. It was a great outcome for such a quick turnaround.”

All proceeds donated during the telethon will stay in the area, and benefit victims of the Memorial Day tornadoes.