At a pre-season party in Steubenville, Ohio, a heinous crime took place: the assault of a teenage girl by members of the beloved high school football team. The film asks: “Why didn’t anyone stop it?”

At a pre-season party in Steubenville, Ohio, a heinous crime took place: the assault of a teenage girl by members of the beloved high school football team.

Roll Red Roll, airing tonight on PBS, (check local listings) reconstructs the night of the crime and its aftermath, a cautionary tale about what can happen when teenage social media bullying runs rampant and adults look the other way. 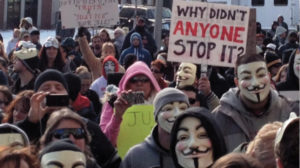 The film unflinchingly asks: “Why didn’t anyone stop it?”

Roll Red Roll is the winner of seven documentary feature awards, and is the streaming debut on the PBS documentary series POV and pov.org.

Like many communities across the country, Steubenville takes pride in its high school athletics. Talented and promising young male athletes are practically town ambassadors, held in high regard by their classmates and the entire community. So when two of these young men are charged with the rape of another student, the entire social structure of Steubenville is threatened, and a legacy of sexual assault and forced silence spanning years is revealed.

The film looks closely at social media, a tool that turns out to be remarkably malleable depending on which party is involved. For students, social media documents the acts that took place, becoming a platform to engage in callous and desensitized mockery of the crime of rape. Local authorities use evidence gathered online to assist with their investigation of the case, including incriminating tweets and 400,000 text messages.

For the rest of the nation, disturbing images, video and dialogue revealed online create a shocking paper trail that anyone can follow.