In a ground-breaking, comprehensive series of broadcast and digital reports, Nexstar Broadcasting sent a team of journalists on a 10-day mission to offer viewers a unique and revealing look at life along the border from one end to the other. Nexstar’s Border Report Tour started in San Diego on Sunday, Sept. 22, and concluded on Tuesday, Oct. 1 in Brownsville, Texas. Along the way, the team generated more than 50 pieces of original content for digital, hundreds of news stories and more than 130 live shots for broadcast.

That man-made line on a map touching California, Arizona, New Mexico and Texas that stretches some 2,000 miles from the Pacific Ocean in the west to the Gulf of Mexico in the east, separating the United States and Mexico. It’s front page news practically every day. Much has been written about it. But what does it look like on the ground? And how does that line on a map affect the people who live, work and travel there? 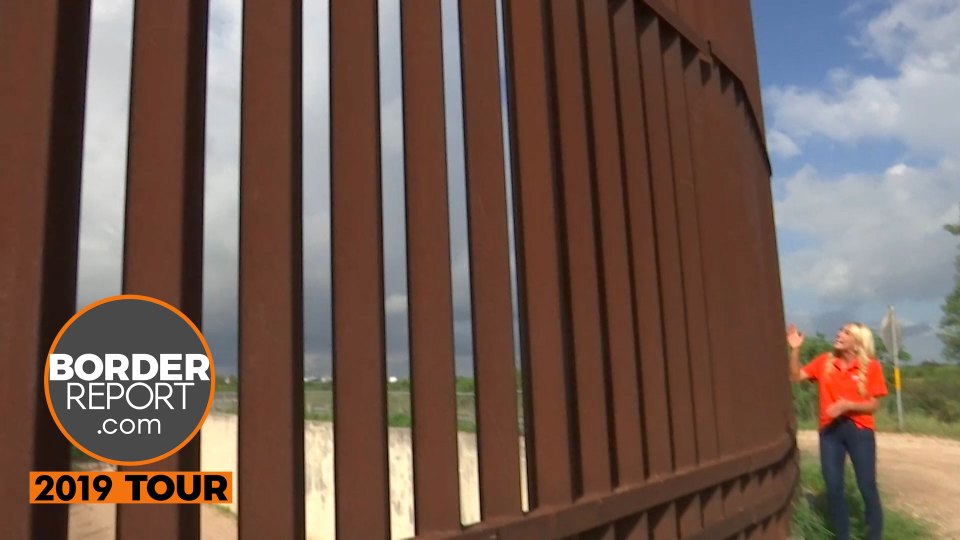 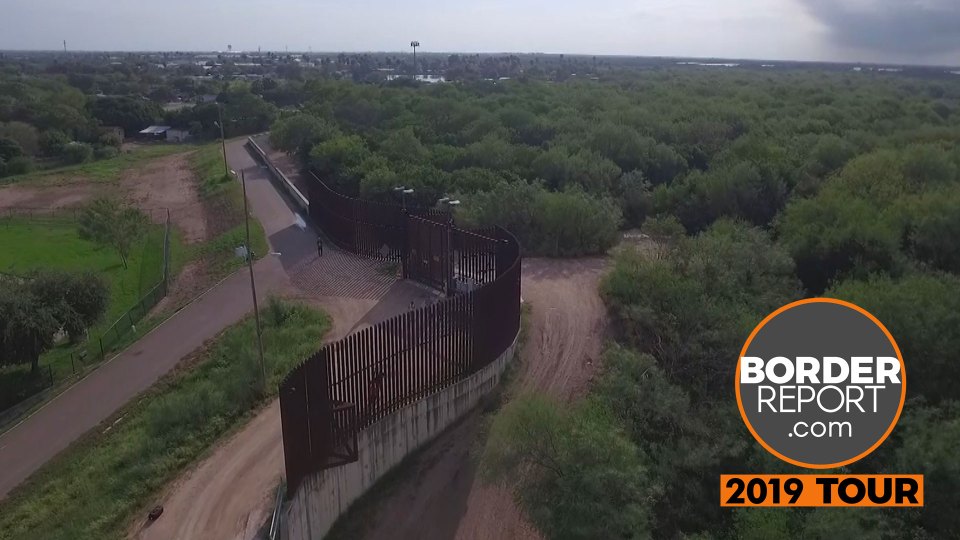 In a ground-breaking, comprehensive series of broadcast and digital reports, Nexstar Broadcasting sent a team of journalists on a 10-day mission to offer viewers a unique and revealing look at life along the border, from one end to the other.

It’s unprecedented for a local TV station group to assemble reporters, photographers, digital content specialists and producers on such a journey and to share their stories with the viewers at the 170 local TV station Nexstar owns.

Nexstar’s Border Report Tour, started in San Diego on Sunday, Sept. 22, and concluded on Tuesday, Oct. 1, in Brownsville, Texas. Along the way, the team generated more than 50 pieces of original content for digital, hundreds of news stories and more than 130 live shots for broadcast.

All of the reports, stories, photos, maps and graphics are available on the Border Report website.

The whole idea of sending a team of journalists to tour along the border and file reports came from Perry Sook, Nexstar’s CEO, and Tim Busch, Nexstar’s president. While they were at the grand opening of the new KTSM operations center in El Paso earlier this year, viewers told them there was a strong need for presenting the untold stories of their local community and other communities in the United States that share a border with Mexico.

The team Nexstar assembled was led by Chris Berg, content development director at Nexstar, and Austin Kellerman, Nexstar’s digital content director. According to Berg, Kellerman was with the team the first few days and Berg took the rest as he was the trip coordinator, planner and manager. Also on the team was Julian Resendiz, a news producer at KTSM, Nexstar’s NBC affiliate in El Paso; Sandra Sanchez, Nexstar’s South Texas correspondent based in McAllen; Anna Wiernicki, Nexstar’s Washington correspondent, and Ozzie Carillo, the news operations manager at KTSM. 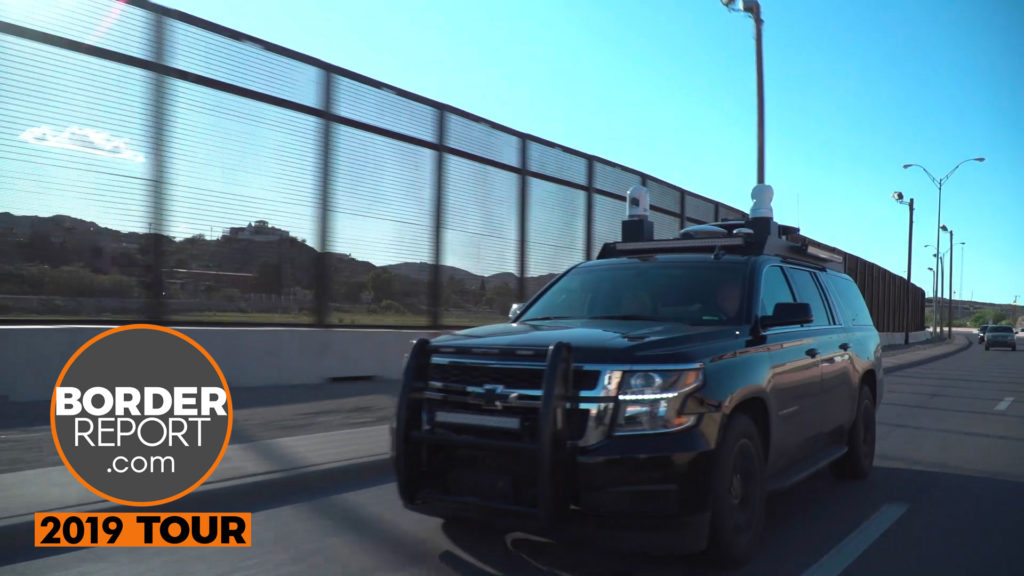 The team got around using Nexstar’s state-of-the-art multi-camera IP vehicle, outfitted with the latest technology to deliver unprecedented footage, including four point-of-view cameras and high-definition full color and FLIR thermal night vision rooftop cameras for a unique and revealing look at the southern border. They are also using a rental car and a third car for a security team Nexstar hired.

I caught up with the team in New Mexico and spoke first to Chris Berg. Here is an edited transcript of those interviews.

Greeley: Security? Why do you need security?

Berg: We are traveling late at night, early in the morning at times through some of the most remote parts of the country and we just wanted to make sure that we had a couple tough people around us in case we ran into trouble.

We plotted this all out. We had to really rigorously plan out the trip. We try to coordinate where we are stopping, why we are stopping there, what stories can we generate if we stop at certain locations, how close can we get to the actual wall when we are doing these stories. Now we’re here in New Mexico and then off to El Paso later today.

What is the mission of this border report tour? What are you hoping to accomplish?

Our goal is to provide a daily look at the lives of the people who live and work along the U.S.-Mexico border.

An ER doctor in Laredo shares why the medical issues he sees there are unique from other parts of the United States: https://bit.ly/2n0Svi1?utm_medium=social&utm_source=facebook_BorderReport #BorderReport

How many stations are broadcasting your reports?

It varies each day, but we have about 20 stations we are doing live shots for every day. But the entire group is being fed the content both digitally and on-broadcast material every day.

Do they have the option to do it or not? Is that how that works?

More stations in the west are clearly more impacted by the border than stations on the East Coast, but all stations have the option to carry it, but most of our live shots are to stations that are in the southwest, so Albuquerque, Los Angeles, San Diego, Austin, and much of the Texas markets, but it’s open to all.

How are you distributing the segments?

From a broadcast standpoint, we are serving all of the Tribune markets that have not been fully integrated because we just closed last week and then the core Nexstar markets. So we are coordinating with KXAN in Austin to help distribute all of the broadcast content that we upload. So we upload from the field and then KXAN helps us distribute the material to the Tribune stations.

I encourage you to look at the borderreport.com website because it’s a vibrant page with multiple fresh stories every day. We actually have a running blog on it to kind of get people to track what we are doing each day and then each night we are live on all our markets border report tour page as well as Facebook as we drive to the next community. Tonight we will be live from seven to nine. We are live tonight on Facebook Live on approximately 100 markets and it was two nights ago when we had really strong cell service that had 250,000 views of that Facebook Live page.

So it’s getting some traction. It’s the insights and the small things that we see first-hand that you can share with viewers. We are just telling people what is going on.

Is there an example that you can point to that was a big revelation?

At this point, Berg handed the phone over to Anna Wiernicki, Nexstar’s Washington correspondent.

Tell me how you heard about this idea and what your thoughts were.

Wiernicki: Chris called me and said they had this idea of going on a tour of the border to check out all the towns along the way and asked if I would be interested and I said absolutely. I report on the border a lot in D.C., so being able to actually be down here and seeing it is just so different and I think it is really cool.

How is it different than what you envisioned prior to actually being there?

Down here the border edge is so fluid. In San Diego people cross over every single day for work or for school. So being in D.C. and just reporting on the wall is very different from being down here and actually talking to people who live here.

In your mind, what has been the biggest revelation to you so far?

The different types of barriers along the way. At certain points just being able to actually walk up to the wall and touch it is unreal. Yesterday, we were talking to cattle ranchers where the wall changed from steel to barbed wire. The cattle ranchers on the U.S. side were saying that they have to work with the ranch in Mexico to keep this barbed wire fence maintained. They originally put it in to keep their cattle separate so the U.S. rancher’s cattle weren’t going into Mexico and vice versa.

It is kind of ironic that it was put up originally to keep cattle out.

Next on the phone was Julian Resendiz, a news producer at KTSM, Nexstar’s NBC affiliate in El Paso.

How did you hear about this endeavor and what were your thoughts?

In your mind, what has been the biggest revelation so far?

People do have a lot of empathy for migrants, but they put their families first, their security first. So you don’t have any anti-immigrant rhetoric, but you have people saying, no, I am glad that there is a law enforcement presence. I am glad my family is safe.

So these are people who came over from Mexico and now they are in the United States, are glad to see that there is some law enforcement and to keep other immigrants from coming in. Is that what you are saying?

You said it perfectly. Just like the rest of us in America, they want the same things, economic stability, jobs, security for themselves and their families. However, immigration is not the only issue here on the border. We have a lot of great economic potential. We have a lot of manufacturing trade that is coming over from Mexico, but we still have poverty issues on the U.S. side of the border.

Next up was on the phone was Sandra Sanchez, Nexstar’s South Texas correspondent.

So when you heard about this project, Border Reports, what was your first thought?

Sanchez: I was totally shocked when they ran the idea by me. Never saw it coming. I thought that we were actually sleeping in the vehicle. I just said, of course, unconditionally. Then on a conference call, they mentioned a hotel. I said, oh we don’t have to sleep in the vehicle every night? But I was willing to.

What has been the biggest revelation for you as you have been filing these reports?

I heard you were working on a story this morning about some students from Mexico coming over to the United States to go to school. Can you tell me a little bit about that?

So that is about a bunch of students who live in Mexico and they cross the border every day to go to school, public schools in New Mexico. They have had this agreement for over 50 years. Their parents will drive them up to the border, the students get out and walk across. There are crossing guards on the U.S. side. There’s Customs border protection personnel that are watching for them and I saw it myself. It is very orderly, it is very safe for them. I asked all of them, do they like going to school in the United States? I think not one of them told me that they did not like it. One boy told me he wants to be an immigration lawyer to end discrimination against migrants which I thought was really fascinating.

Is there anything more you want to add?

I am really proud that Nexstar invested in a trip like this to showcase the border. I hope that they will send me back to follow up on some of these stories that I have been coming up with in Arizona, New Mexico and California. I hope this is not my last time through this part of the woods.

Click here for more information about the opening and how to apply.