The Bay Area Rapid Transit (BART), San Francisco’s transportation network, serves more than 420,000 commuters each day. KNTV’s investigative unit spent months recording on BART trains at all hours to explore how a once-renowned transportation network became one of the most dangerous in the country. 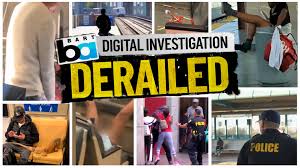 The Bay Area Rapid Transit (BART), San Francisco’s transportation network that serves more than 420,000 commuters each day, is the focus of a five-part digital investigative series by KNTV, the NBC’s San Francisco O&O.

Derailed, exposes how this once-renowned subway system became one of the most dangerous in the country.

Most people in the San Francisco Bay Area seem to have a BART story: good, bad, weird. BART is a lifeline for commuters with 723 trains, 122 miles of track, 48 stations, and more than 420,000 rides each day. Those trips, however, can sometimes be dangerous. Violent crime on BART has more than doubled in recent years.

Chapter One: All Aboard
From tasers and knives, to street performers and exotic animals, you never know what you’ll see when you hop on a BART train. The NBC Bay Area Investigative Unit spent months combing through police records and talking to passengers who fear BART has become too dangerous to ride.

An analysis by the NBC Bay Area Investigative Unit reveals BART has a higher rate of violent crime than transportation systems in New York, Washington and Atlanta. The investigative unit spent months recording on BART trains at all hours to explore how the transportation network became one of the most dangerous in the country.

Chapter Two: The Train Has Left the Station
Building the original BART system took five years and $1.6 billion. The transportation network was unveiled in the early 1970s with much fanfare, but in recent years, the agency has lost the public’s trust after a string of high-profile passenger deaths.

“We set out to take a comprehensive look at BART in a way that also held the agency’s top leaders accountable for what we discovered are far-reaching safety concerns,” said Bigad Shaban, KNTV’s senior investigative reporter.

“We relied on data-driven reporting, compelling interviews, and footage from our own viewers to tell the story of serious and systemic problems within BART.”

Chapter Three: End of the Line
BART Interim Police Chief Ed Alvarez acknowledges his police force of roughly 170 officers is not large enough to adequately protect passengers. He hopes to hire about 100 more officers over the next five years, but that is contingent on receiving significantly more funding for his department.

“At NBC Bay Area we are constantly striving to provide our audience with the best digital and social experience for every story,” said Stephanie Adrouny, KNTV’s news director.

“We’re very proud of this innovative series from our award-winning investigative team. It focuses on an important quality of life topic for people across the Bay Area.”

Chapter Four: Blind Turn
For months, the NBC Bay Area Investigative team sought to obtain BART surveillance videos used to close more than 100 criminal cases. BART, however, has refused to release the footage and faces allegations of lacking transparency in light of its record of withholding police reports and surveillance video.

Chapter Five: Full Steam Ahead
BART’s new General Manager Bob Powers has a long-term safety plan to boost the agency’s police force by about 100 officers and install new barriers at each of BART’s 48 stations. It’s unclear, however, whether the agency will be able to secure the millions of dollars necessary to make those changes and protect passengers.

WRAL, the dominant television station in the Raleigh-Durham-Fayetteville market, is seeking a strong news producer to craft, write and oversee compelling, visually interesting and fast-paced newscasts. During the newscast, this person is responsible for timing stories, weather, and sports to ensure the newscast ends on time; coordinating breaking news stories; and leading the production crew in the control room to make sure the newscast is executed cleanly on the air. We’re looking for a person with outstanding leadership and communication skills, proven writing ability, a vision for graphics, and a passion for memorable, creative newscasts. Click here for more specifics and how to apply.