KPTV Airs Promo Made With Legos During Super Bowl 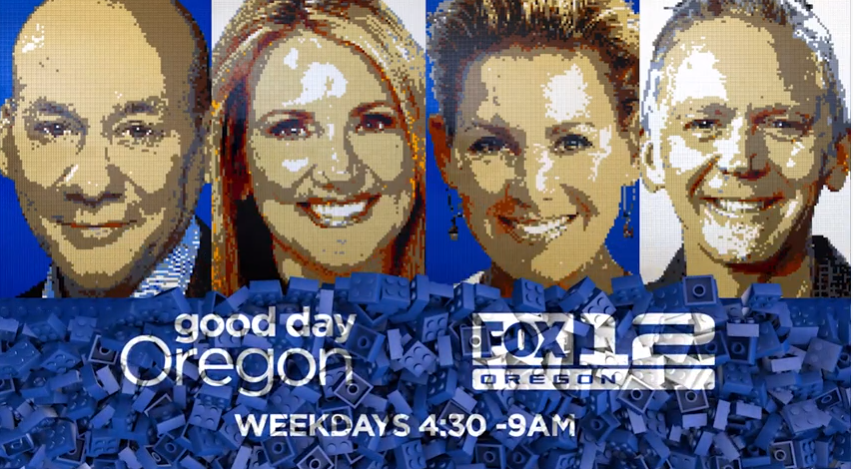 Fox affiliates around the country took advantage of the captive audience of the Super Bowl to air highly-produced and moving spots for their stations. WBRC, Gray’s Fox affiliate in Birmingham, Ala. (DMA 44), unveiled a testimonial campaign from tornado survivors who thank the station’s First Alert weather team for saving their lives.

Jamie Holmes, KPTV’s marketing director, said she had an idea for a Lego artist, Brian Hanna, to create the faces of the morning news talent and to record the build.

“Each head took about two to three weeks to complete,” said Holmes.

“We did a little preview of the ad in Good Day the Friday before Super Bowl without showing the final reveal of the art, and used quick VSOTs with Brian talking about the build with a push to watch for it Super Bowl Sunday. After the spot aired, we had each of our talent take to social to show off the ad and we posted a longer build of all four faces on our FOX 12 social pages as well. The response has been terrific.”

Can’t imagine people could make portraits out of Lego blocks. This is amazing! — Kenny

I did see it and I said “there’s my sweet morning crew” 🙂 Definitely over the top amazing! — Nina

They are the most amazing Lego creation I have ever seen! Great job. — Phyllis

“This was truly a collaborative effort,” Holmes added. “Everyone on the creative team had a hand in some aspect of it, even if just checking in on the timelapse video. I’m so proud of the finished spot and the work of art Brian Hanna created. We commissioned the piece for our newsroom, so the visual will live on long after the spot is retired.”

Coincidentally, the Fox show, Lego Masters, premiered last night. Holmes said the station is excited to air its promo during the new show.

“It wasn’t planned that way when we began working on the spot, but I’m sure glad it worked out. Timing is everything!”

KIMT, the CBS affiliate in Rochester, Minn. (DMA 150), has an immediate opening for the position of chief engineer. KIMT’s chief engineer is responsible for all studio and transmission technical operations, maintenance, and information systems.  As part of the station’s senior management team, this position plays a vital role in station strategic planning, budgeting and day-to-day operations. Rochester is a growing family-friendly community, consistently rated as one of the best cities to live in the Midwest and the home of the world renowned Mayo Clinic. Click here for more specifics and how to apply.