It’s been described as the single bloodiest day in modern American political history, yet it’s also a story held back from most history books. Until now.

One hundred years ago, in a small Florida town, a Black man who tried to vote was hanged by an angry White mob, including the police. Then the entire Black community was attacked, and every house, school and church burned. An untold number of people were killed, Black and White.

It’s been described as the single bloodiest day in modern American political history, yet it’s also a story held back from most history books.

WFTV, Cox’s ABC affiliate in Orlando, presented an hour-long documentary about the massacre in the town of Ocoee, just west of Orlando.

Ocoee Massacre aired on Nov. 1, a Sunday night, at 7 o’clock, a tough time slot pitting it against 60 Minutes.

“I had heard about the Ocoee massacre about five years ago,” said Daralene Jones, an investigative reporter and anchor at WFTV.

“I was reading a book about what they referred to as an Ocoee riot and so that piqued my interest.”

Over the years, Jones tried to research the story, but found little information about it, “just little snippets here and there, like the pieces of a puzzle.”

Then during a Florida legislative session earlier this year, a Florida senator, Sen. Randolph Bracy, pushed a measure to get the Ocoee massacre taught as part of the curriculum in schools.

“I thought now is the time because it was concerning to me that there were a lot of people who lived in and around the area who still didn’t know a whole lot about this, including myself,” Jones said.

Finding material to tell a 100 year-old story can be difficult. And since no arrests were made, there was little legal documentation about the incident.

“Yeah, that was really the hardest part because, being an investigative reporter, a lot of what I do is data-driven journalism and source related, and so I had to figure out where my sources for information are going to come on this.”

Eventually, Jones tracked down a group that, 20 years ago, wanted to make the community aware of the incident, but nobody would listen.

“It was like a jackpot because they had, 22 years ago. done so much research about Ocoee and the massacre it was like opening up a floodgate of information. That was like a gold mine. That is [when] I realized that my role in this, trying to bring the story to fruition, was going to be so important because they needed a voice. 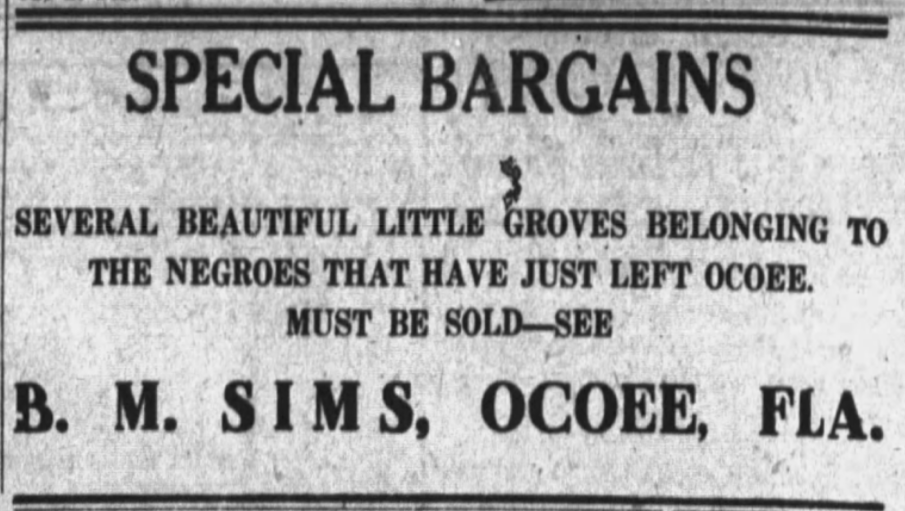 They needed somebody to give them a megaphone and a voice to really amplify this story and that is when I realized how significant and important the work was going to be over the next several months.”

It was at this point that Jones approached WFTV management about pursuing the project.

“I do tip my hat to our management team who really let the employees put it together in the way that it fit.”

And how did Ocoee Massacre do up against 60 Minutes?

NOTE: There is now a push for reparations by the descendants whose ancestors owned land in Ocoee. Records show the land owned by at least 24 families is worth more than $8 million today.

WHBQ-TV, Cox Media’s Fox affiliate in Memphis, Tennessee (DMA 51) is in search of a Director of Sales to lead their top performing FOX affiliate. Are you a dynamic sales leader looking to lead an awesome television sales team in the Mid-South with no state income tax? The ideal candidate will be responsible for managing the sales strategies of a multiple media portfolio.