Put your thinking cap on. The questions can be hard for rocket scientists, Rhodes scholars and Mensa members, let alone high school students. What country was the birthplace of the Nobel Prize-winning author Nadine Gortimer? Expo 1929 was held in what capital of Catalonia, the second most populous city in Spain? And believe me, these […]

Put your thinking cap on.

What country was the birthplace of the Nobel Prize-winning author Nadine Gortimer?
Expo 1929 was held in what capital of Catalonia, the second most populous city in Spain?

And believe me, these are the easy ones.

It’s time for WTVO’s Stateline Quiz Bowl by Bergstrom, held every Sunday on the campus of Northern Illinois University in Rockford, Ill., where 22 local high schools gather for a battle of the brains. The tournament-style, half-hour contests air exclusively on WTVO-WQRF starting this week and for the next 21 weeks.

“It’s community outreach,” says Lattimer, “but it also encourages education and recruitment to keep the brain drain from continuing. The schools are grateful for the opportunity.”

“WTVO approached us about exploring this type of show,” says Wes Cotton, general sales manager for Bergstrom, a global company that designs and manufactures heavy-duty trucks and specialty vehicles. Bergstrom’s corporate headquarters are in Rockford. “It’s a minimal investment to improve the community.”

WTVO next talked to Northern Illinois University because it had an auditorium that was perfect for the venue.

“We immediately saw the value of an activity that celebrated academic excellence,” says Dr. Rena Cotsones, associate vice president of engagement and innovation partnerships at NIU.

The university offered scholarships worth $40,000 to the winning team. “These are prospective students for Northern Illinois University,” Cotsones says. 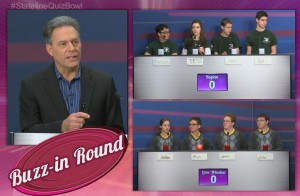 WTVO then sent letters to all of the area’s 34 high school principals outlining the project. Of those, 22 accepted the invitation to compete. Some that opted out for this year are on a waiting list for next year.

WTVO-WQRF’s creative services director, Shawn Anderson, helped develop the show and serves as an executive producer. He has promoted the show across the stations.

“You’d have a hard time getting away from on-air promotions for this,” he says.

Lattimer says she hears schools are having viewing parties.

Viewers have responded well to the show as have the schools, even if they didn’t win.

“My husband and I enjoyed the quiz bowl a lot. As a recently retired teacher, I have to commend you on your positive feedback and encouragement to both teams. You did a great job! Hats off to all that had a hand in starting this.”

“We would like to thank you for putting on the Stateline Quiz Bowl. Even though we did not do so well, we had a great time and hope that you continue the event in future years.”

Nexstar is exploring the idea of having its other TV markets in Illinois get involved. And Lattimer is already hearing from the junior high schools in the area, which are asking, “What about us?”

I think a kindergarten version would be way cool, but they’ll have to come up with easier questions.