Sundays, in homes all over the country, people are watching investigative journalism on a news magazine type program. News from here and around the globe. Investigative stories about terrorists, refugees, immigration, national security, government waste, corporate corruption, and interviews with presidential candidates, politicians, experts and other newsmakers. Serious topics, tough questions. But instead of being 60 […] 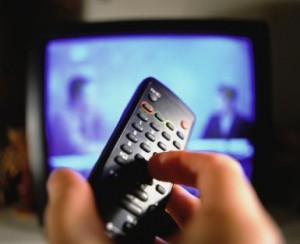 Sundays, in homes all over the country, people are watching investigative journalism on a news magazine type program.

News from here and around the globe.

But instead of being 60 minutes long, this news program, Full Measure, is a half-hour.

Produced by Sinclair Broadcasting, one of the largest television station operators in the U.S., Full Measure focuses on investigative, original and accountability reporting.

So why is Sinclair, a group owner of TV stations, funding, producing and promoting a half-hour news show that airs on Sunday mornings in its markets?

“It helps us establish a national presence,” said Scott Livingston, Sinclair’s VP of news who oversees the production of Full Measure.

“We hope this program reinforces what we stand for across the country in all of our local markets. This is what we’re trying to do in our local stations, go beyond the headlines, and this program helps reinforce that.”

It’s a bold move to start an ambitious investigative news program that includes a staff of producers and reporters from scratch, one that comes with a sizable investment for Sinclair.

“I thought it was bold for them,” said Sharyl Attkisson, host of Full Measure, “when everybody else seems to be dialing back, saving money, not taking chances, not wanting that kind of reporting.”

“There are people who want more in-depth reporting.”

A recent Full Measure investigation looked into the results of a federal inquiry compiled after the 9/11 terrorist attack, and why 28 pages of that report have been kept secret for 14 years.

If you’re thinking this is the kind of story you’d expect to see on 60 Minutes, you might be right. Full Measure’s version was pushed on air several weeks early because rumor had it that 60 Minutes was working on the same piece.

Livingston, himself a Murrow and Emmy-award winner, thinks there’s a real void of content and perspective in today’s journalism.

“A lot of the reporting scratches the surface. Our pledge is to dig deeper. And I think we’re doing that with Full Measure.”

How are the topics chosen and developed?

“It’s really old school,” said Humphreys, “stories that excite us as we talk about them, are the topics we develop and go after.”

“If there’s information that some powers-that-be are trying to keep secret or are putting misinformation out about, I want to do those stories,” said Attkisson.

And what role does Sinclair corporate have in the process?

“We made a promise that our focus would be fearless investigations,” said Livingston, “that’s the cornerstone for Full Measure.”

“If there are stories we want to do, no one has said no,” said Humphreys.

“We would not cave to any type of editorial pressure. And the company has made it clear from the beginning that that is not their intent.”

Sinclair has given Full Measure a one-year commitment.

Although Livingston says the show’s success is measured more by a commitment to quality journalism than ratings, in just a few months, the show has exceeded performance expectations.

“We believe we’re at a point where we can syndicate the program,” said Livingston, “and reach almost the entire country.”

Sinclair has thrown its corporate support behind the program promotionally, providing each market/station with weekly episodic promos that the stations run on a fixed schedule.

“The dedication of the company’s been remarkable, said Humphreys.

“The company has supported the show much stronger and higher than I anticipated at the beginning.”

“As a news guy,” said Livingston, “I’m excited to see this success. This is serious journalism, serious topics, and it’s great to see that people will watch.”

“I think there is a real demand to hear this type of reporting,” said Humphreys.

“I like to think the show can make a small difference,” said Attkisson.