“In 1991 we launched a format wildly different and inventive for its time, whose success would eventually shape the way morning news was broadcast in markets across the country,” says Scott Altus, KTLA’s creative services director. 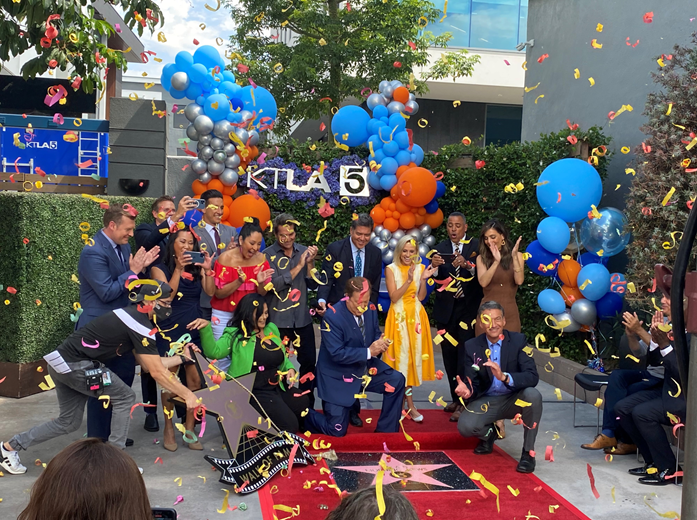 KTLA, Nexstar’s CW affiliate in Los Angeles, is celebrating the 30th anniversary of its morning news.

In honor of the occasion, the Hollywood Chamber of Commerce presented the station with an Award of Excellence.

“We were just hoping to stay employed,” Amezcua says.

“We got zero ratings for about four months. But look what 30 years has done.”

“In 1991 we launched a format wildly different and inventive for its time, whose success would eventually shape the way morning news was broadcast in markets across the country, while establishing a style now emulated by GMA, the Today show and many others,” says Scott Altus, KTLA’s creative services director.

Altus says the station put different elements in play from on-air, social, and out of house.

“We worked hard to walk the delicate line of celebrating the past without dwelling on it, while looking forward to the next 30 years and beyond,” Altus says.

Nexstar Broadcasting Group seeks an experienced, driven broadcast professional to serve as Vice President/General Manager of its media properties in Charlotte, North Carolina (DMA #22), including WJZY FOX46, WMYT (MyNet) and its accompanying local digital operations. Nexstar seeks a stakeholder – someone who is engaging, promotes good citizenship and wants to make a positive impact on the local community. If you are a decisive leader driven by a determination to succeed, have a tireless work ethic, as well as a commitment towards creative, successful revenue generation and engaged in serving the community, then apply online. Click here for more specifics and how to apply.