Can you imagine working at the same place for 47 years? It’s rare in any business but it’s especially so in local television. So I honor Laura Hand for her service to the news viewers in Syracuse.

“It’s our Last Look, which is how we always close the show, and it’s the last for me,” said Hand during her final broadcast.

After attending Syracuse University, Hand began her broadcasting career in 1972 when newsrooms were dominated by men. Breaking barriers, she became the first female reporter at WSTM. 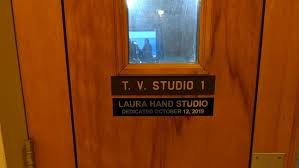 “I was told so many times, ‘Oh we would never hire a woman,’ but once I got working, I opened my own doors,” she said.

Now, whenever young journalists or veteran anchors open the doors to the WSTM studios, they’ll be reminded of Laura Hand. In honor of her 47 years of dedication to Central New York, journalism and WSTM, the station’s broadcasts will originate from the Laura Hand Studio.

NOTE: Can you imagine working at the same place for 47 years? It’s rare in any business but it’s especially so in local television. So I honor Laura Hand for her service to the news viewers in Syracuse.  Think of what the journalism students attending Syracuse must think of Laura Hnad’s accomplishments. There is a lot more material about Hand’s contributions, and how her co-workers are honoring her, on WSTM’s website. If you’re inspired by Hand’s story, I encourage you to visit the site. It’s really cool how the station came together to recognize Laura Hand, and her contribution to local TV journalism.

The stations present a rare dynamic as a Big 4 television duopoly in a top 25 market. The stations produce over 90 hours of local content each week. Indianapolis is a highly competitive market with more than a million TV households and five news-producing television stations. In a 24/7 news town, the powerful WXIN/WTTV duopoly leads the market in ratings, revenue and community service. Click here for more specifics and how to apply.