Hoffa’s disappearance is one of the most notorious unsolved crimes of the 20th century. He lived most of his life in Detroit and was last seen 20 miles north of the city. Interest in what happened to Hoffa has never waned, and the mystery only deepens as the decades pass. Recent projects, including a Martin Scorsese film on the subject, are sparking a new wave of theories, investigation, and excitement about what seems to be the ultimate cold case. 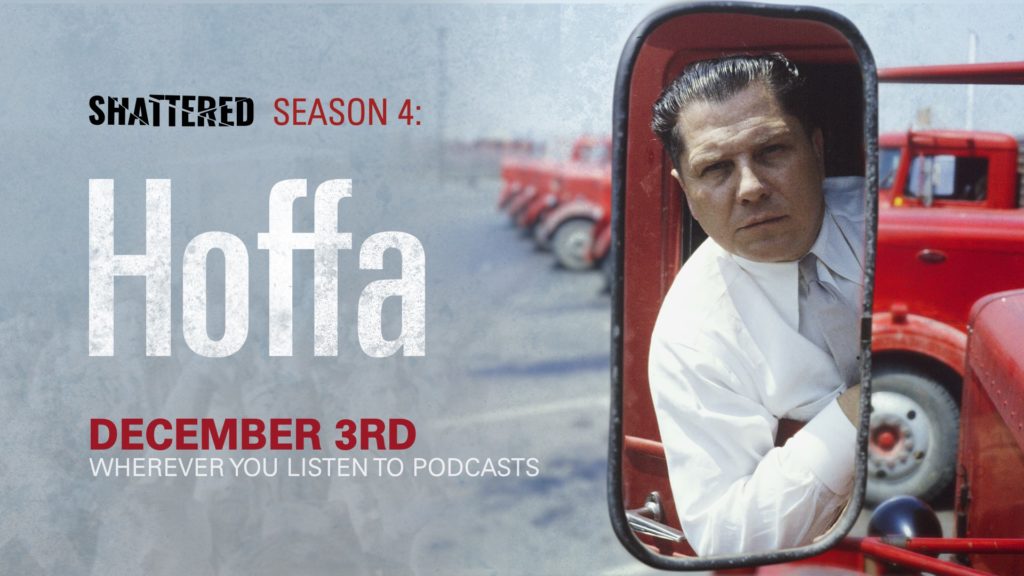 The disappearance of labor leader Jimmy Hoffa has baffled just about everyone since he vanished in 1975 from a Detroit restaurant. Was he murdered? Was the mob involved?

“Once you start looking into Hoffa, you find yourself down a rabbit hole of dark tunnels,” said Steve Garagiola, a veteran journalist at WDIV, Graham’s NBC affiliate in Detroit.

“You look at the Teamsters Union and end up at Richard Nixon, Bobby Kennedy and the JFK assassination. All of these roads lead us back to Hoffa’s obsession with power.”

Garagiola is the host of a new, five-part season of podcasts, Shattered: Hoffa, that will chronicle the rise and fall of the iconic labor leader.

The first part of the Shattered: Hoffa podcast series premiered today and a new episode will be released every Tuesday for the next month. The entire series will be available for free on Apple Podcasts, or your preferred podcast listening platform.

Here’s the podcast trailer which is audio only:

“We are uniquely positioned to tell the stories like the disappearance of Jimmy Hoffa because of our extensive reporting and archival footage on the topic,” said Kim Voet, WDIV’s news director.

“We have reported on this story since day one and few media outlets have the library of material, and institutional knowledge of this historical event.”

In addition to the five-part podcast, WDIV aired a primetime special on Dec. 3 at 10 and has aired several news stories pertaining to Hoffa.

The first three seasons of Shattered have garnered nearly 3.5 million downloads with audiences from 170 countries. Season 1 investigates the 2010 disappearance of three brothers in Morenci, Mich. Their father said he gave the brothers to an underground organization. Seven years later, the boys’ whereabouts is not known.

KLKN, Standard Media Group’s ABC affiliate in Lincoln, Neb., needs a director of sales. The director of sales leads and develops the sales team, maximizing broadcast and digital revenue through effective inventory and customer relationship management. Responsible for the overall sales effort, share and revenue growth. Responsible for building a strong sales marketing team that is media agnostic; that is able to sell across all screens and all platforms. Click here for more specifics and how to apply.