In this week’s Social Scorecard, see how Facebook Live not only drives engagement for WLTX, but makes its news coverage more relevant. WLTX, Columbia, S.C.’s CBS affiliate owned by Tegna, leads the market in social media actions over the last six months according to data from audience insight firm Shareablee. WLTX has just almost 3.2 […]

In this week’s Social Scorecard, see how Facebook Live not only drives engagement for WLTX, but makes its news coverage more relevant.

WLTX has just almost 3.2 million actions on social, 48% of the total engagement generated by the DMA (No. 77), with more than 6.5 million social actions.

The State, Columbia’s daily newspaper owned by the McClatchy Co., leads the market on Instagram with more than 50,000 actions. 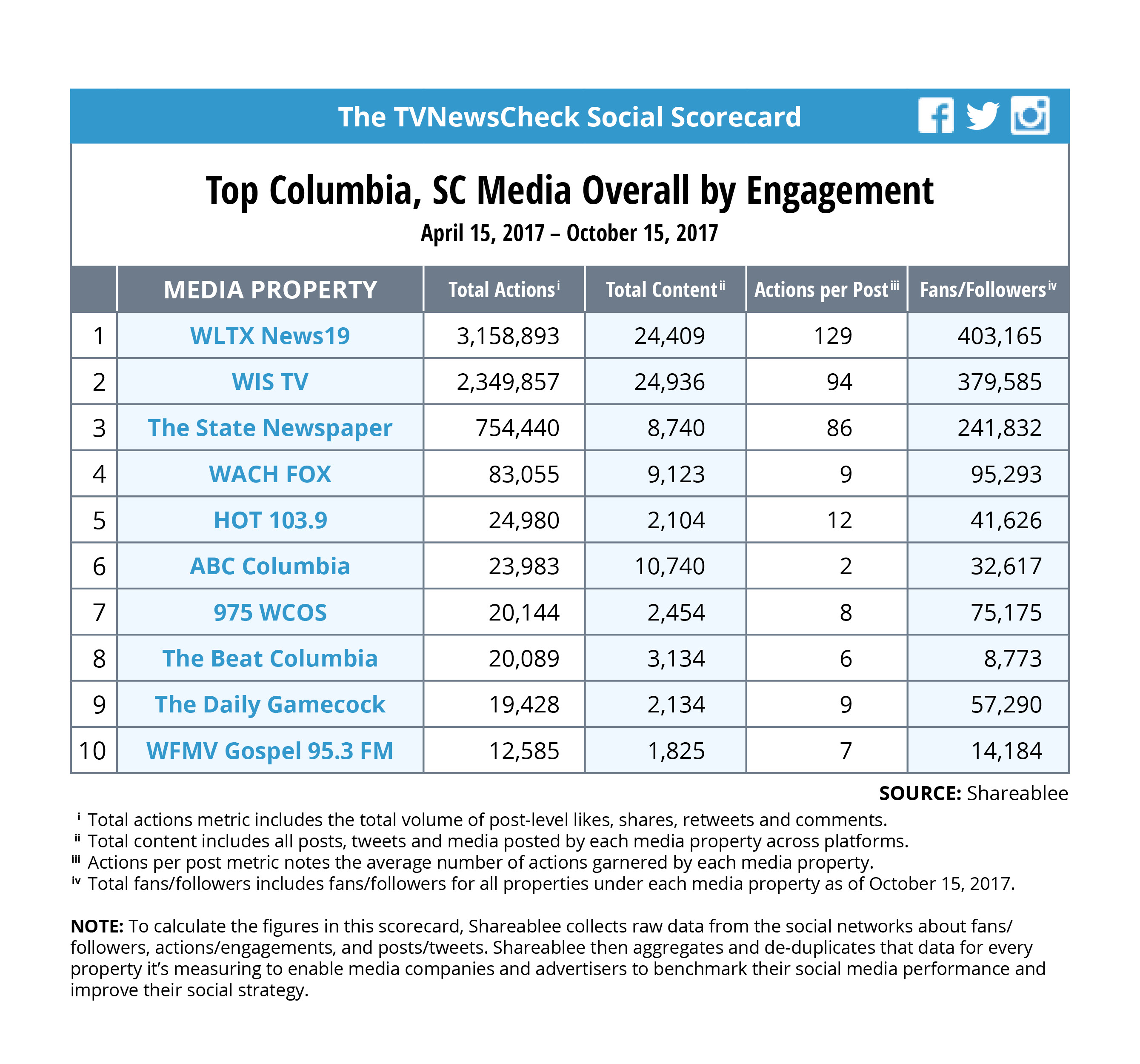 How is WLTX able to control half of the social engagement in Columbia?

“Facebook Live has become a big deal for us. When we had hurricanes Irma and Maria coming towards South Carolina, we would do extended Facebook Live segments with our chief meteorologist and really dig deep into what was going on. We had so many people who were asking us questions. What about this, what about that? We will stay on until we have all the questions answered and I think it’s been one of those things that is just a part of what we do.”

“They want it because there’s that inherent sense of urgency. It’s such an imperative part of what we do. So, we will be on Facebook Live for any breaking news story.”

Facebook Live has become such a part of the station’s DNA, it uses it during the morning news.

“We Facebook Live our morning show separate from the live stream on our digital platform,” says Eisenman.

“They get to see what we are doing and if you look at our Facebook Live in the morning, they are literally saying I am watching you on two screens. I am watching you on TV and you are talking to me on Facebook. It’s incredible and it’s an instant feedback that we have never had before.”

One way WLTX uses Facebook Live is to try to convert its Facebook users to be WLTX newscast viewers.

“What we will do is: 15 minutes before show time, we will start the Facebook Live,” says Eisenman. “It may be starting a conversation about a particular investigation or a lead story. You start that conversation, you start talking about it. It’s amazing how you can get that cross-pollination.”

Another attribute to WLTX’s success on Facebook, and one that makes its news coverage more relevant, is how the station actively listens and responds to what its Facebook users tell it.

Responding to what Facebook users are saying, Eisenman notes, often takes the story into another coverage direction.

Eisenman says a recent story about a state policeman who was rear-ended and killed on patrol led to additional news coverage about the state’s Move Over Law.

A woman sent pictures of dirty tap water, water so bad she didn’t want to bathe her child in it, or give it to her dog, led to the station getting in touch with the utility company which promised to install new pipes in that town.

“It’s a hundred percent about being relevant,” says Eisenman.

How important a role is Facebook to WLTX’s news operation?

“Local news is now more relevant than it’s ever been. It’s as simple as that,” says O’Dell.

NOTE: Staying connected with the community is central to WLTX’s mission.

On its web page, WLTX lists the names, titles, direct phone numbers, and emails of its management team. Such transparency is rare in local television.

“Just so you know,” says O’Dell, “the people who call, we answer every one of those calls.”