When KVVU, Meredith’s Fox affiliate in Las Vegas, put its sales account execs on camera to sell the merits of Meredith Las Vegas, the results were dramatic. 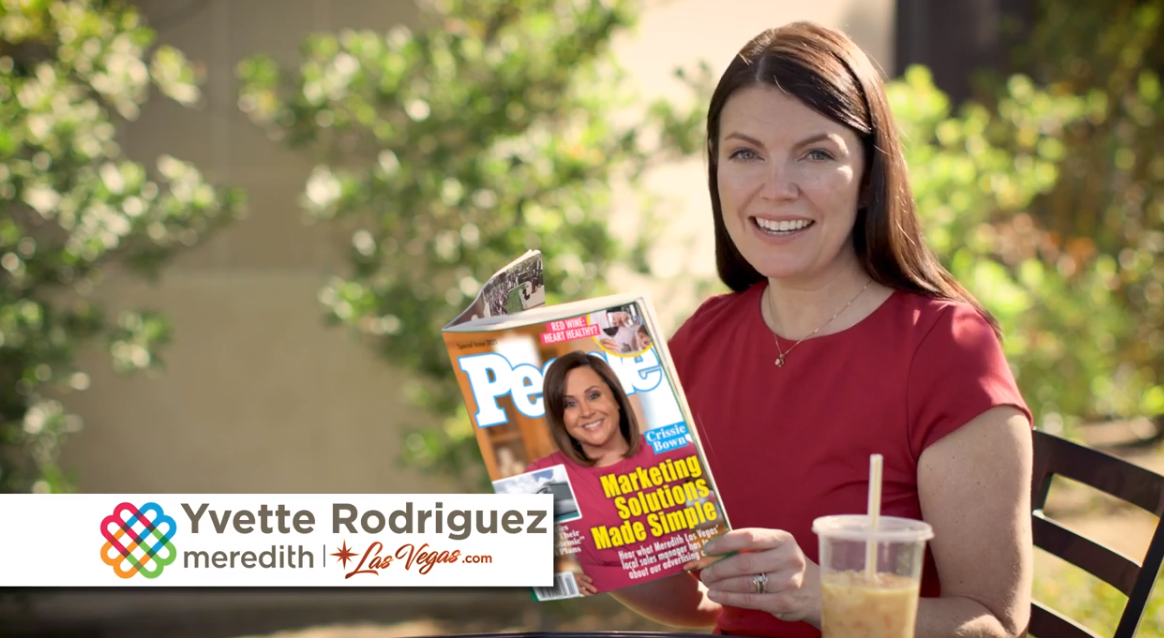 But in Las Vegas at KVVU, Meredith’s Fox affiliate, they’re front and center in a campaign that’s proved wildly successful for the station.

“When we put our AEs in the spot, we got a great response,” says Yvette Rodriguez, KVVU’s marketing manager.

Rodriguez, who’s been at the station going on 16 years, was tasked in 2019 with branding Meredith Las Vegas, a sales initiative that encompasses the branding power of Meredith’s magazines like Better Homes And Gardens, People and Entertainment Weekly with all of KVVU’s platforms — television, digital, web and OTT.

“Fox 5 here in Las Vegas has such recognition,” Rodriguez says. “People just thought we just do TV, but we do so much more than that.”

The campaign kicked off in March, 2020 with a graphics-driven spot introducing the concept of Meredith Las Vegas.

“It did well,” Rodriguez says. “And then the pandemic hit.”

Like nearly every TV station in the country, KVVU had to pivot and come up with a message that said “we are here for you” with offers of special packages and rates, Rodriguez says.

In April 2020, the station refreshed the campaign with the sales account execs on camera, which, Rodriguez says, “took a little convincing.”

Since everybody was at home due to COVID, the AEs “filmed on their own with their iPhones in their house just like most clients were getting their message out, filming it themselves,” she says.

Rodriguez notes that as Las Vegas started to reopen, she wanted to get the message out “that we are open, let’s meet.”

And what better way to get the message out than putting it on TV, she says. “It is truly practicing what we preach.”

Patti Mills, one of the account execs in the spots, says the TV campaign stood out and sent a message to the business community about advertising on KVVU.

“We’re choosing our own air because we know it works.”

The spot got a great response, made the phones ring and generated emails from people curious about Meredith Las Vegas, all of which led to a lot of leads, Rodriguez notes.

And with that came recognition for the AEs who starred in the spot.

“They get recognized by their clients, friends and by people who say, ‘Hey I saw you on TV,’ ” Rodriguez says.

The current spot in the Meredith Las Vegas campaign made believers of the local sales execs.

“When the calls start coming in and we could show them the website traffic, the numbers talk and it is pretty powerful,” Rodriguez says. “It’s the same thing we tell our clients: television works.”

In addition, she adds, the “Meredith Las Vegas We’re Open” spot, which premiered in late January 2021, has generated a 400% increase in leads in January and February over December 2020.

WSMV-TV, Meredith’s NBC affiliate in Nashville, is seeking an enthusiastic and competitive Promotions Producer to join its hardworking team. The Promotions Producer must be able to write, produce, shoot and edit station promotions in a fast-paced work environment. This person is responsible for daily topicals, proof of brand and special reports for multi-platform distribution. Click here for more specifics and how to apply.